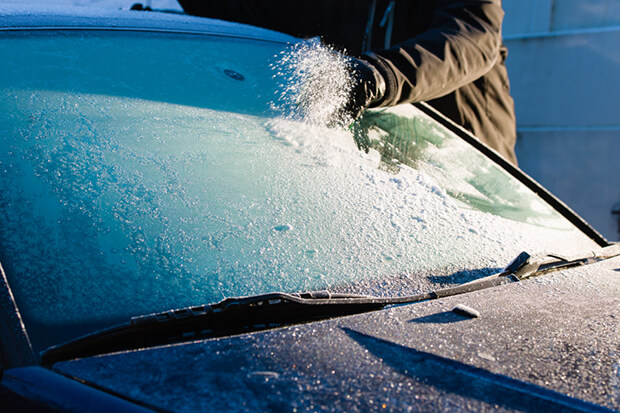 It’s that time of year again when we can feel the cold snaps coming in once more. As we approach wintertime it is a good idea to be prepared for winter motoring.

As such, here are some top tips on defrosting your car safely without getting yourself into hot water

1. Turn on the engine early

It may sound blinking obvious but before you do anything turn your engine on. The most effective way of de-icing your car is to flick on the air-conditioning and let it circulate in the car.

Yes, you heard correctly, put the air conditioner on, especially when the windows are fogged up.

If you do this you will notice that the air conditioner on and air vents directed at the window setting will clear the windows far quicker than heat.

2. Do not leave your car unattended

Owners who leave their engines running while they run inside to grab something or even get a cup of coffee before they leave for their journey are a car thief’s dream.

According to the law, drivers have to be ‘in control’ of their vehicle at all times. In the UK, a motorist was actually fined £30 for defrosting his car outside his home because he left it unattended with the engine running.

It is an offence in many countries to leave a car unattended with the engine running on the public highway.

If you need to go back into the house you should turn off the engine, lock the car and head in. Car insurers rarely pay out if the keys are left in the car.

3. Get rid of any snow or sleet

Use a brush to wipe off all the snow from the car, making sure the front grille is clear.

4. Start de-icing the outside

Make sure you keep a scraper and some de-icer in the car for mornings when you are stuck. As the engine warms the car from the inside get scraping from the outside. Don’t wipe windows with your hands as they will only leave greasy smudges.

5. Never use boiling water on glass

As most of us know, we should never use boiling water on glass as the rapid expansion and contraction of the ice can cause the screen to crack.

6. Wait until all the glass is clear before you drive off

It is always worth waiting that few extra minutes just to make sure your car is safe to drive before you head out in the icy weather.

Insurance experts say car owners who start their car on cold frosty mornings and then go back indoors, even just for a minute leaving their car unattended are leaving themselves open to the vehicle being stolen and not being covered by their insurance.

Opportunistic criminals will specifically roam areas on frosty mornings looking for your unattended car in the driveway or on the road outside defrosting. One smash of the window and the car thief is away and he will not have even needed to turn the key and you will have done all the hard work for him and even warmed the car for his comfortable getaway.

MyVehicle would advise that motorists should give themselves more time on frosty mornings to de-ice their car using a scraper rather than leaving the engine running and risk having the car stolen. Ian Crowder of the AA says:

“If you put your keys in the car and then walk away from the vehicle you cannot expect your insurance to pay out.

"You have a duty of care to not behave in an idiotic manner which puts your property at risk.”