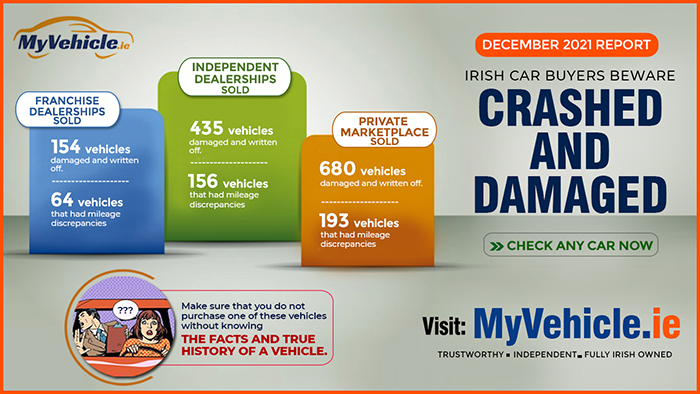 MyVehicle.ie has released the damaged and crashed cars report for the month of December 2021. Let’s hope that you are not one of the unfortunate car buyers who got caught out with a previously damaged car.

It is also advisable to purchase a full car check before buying any used car from a franchise dealer and it should also be remembered that not all car history checks are the same. MyVehicle.ie has more damage data and alerts than any other supplier in Ireland.

Main dealers had 64 vehicles for sale which were discovered to have mileage discrepancies during November. Last month, 93 vehicles had some kind of mileage discrepancy so this was a drop by 29 from the previous month. It is vital, therefore, to always run a car check before buying from any, whether that be a franchise dealership, trader or privately.

During December there were 435 previously damaged vehicles sold at independent garages. This was a slight drop from the 460 damaged or written-off vehicles in November, a decrease of 25 vehicles over the previous month.

As with car damage, there was also a sizable decrease in the number of cars showing mileage discrepancies during December. On sale at Independent dealers were 156 vehicles, which was down from 175 vehicles in November, a drop of 19 vehicles with some type of discrepancy displayed on the report.

The private car sector is where you will normally find the biggest problems and the biggest risk. During the month of December there was just a small decrease in vehicles sold which were damaged.

There wasn’t much of a change in the number of discrepancies during December compared to the previous month. In December 193 vehicles were found with some kind of anomaly on the mileage record. This was a drop of just one vehicle over November, when 194 vehicles were sold privately with discrepancies.

Previous Article: Buying a Used Car in Ireland
Next Article: Damaged and Crashed Car Report for the Month of May