Crashed and Damaged Car Report May 2022 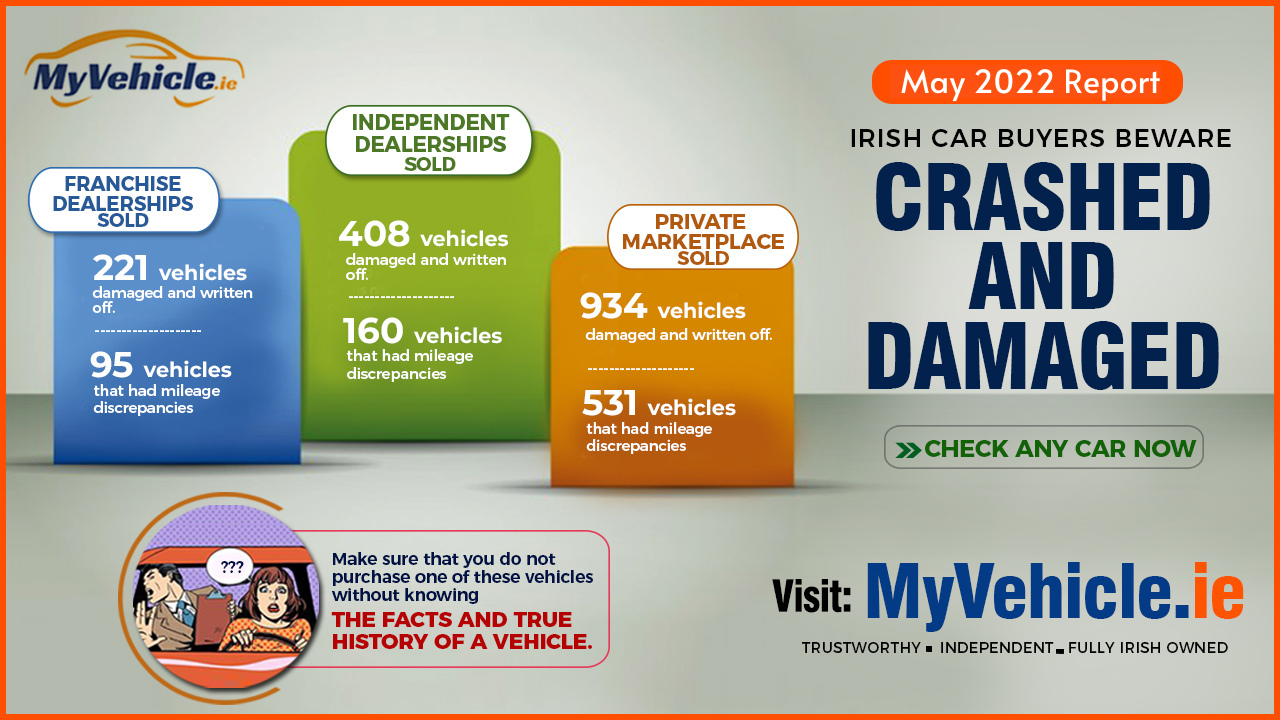 The MyVehicle.ie crashed and damaged car report has been released for the month of May. We hope that you are not one of the unfortunate ones who have been affected by one of these previously crashed or damaged cars?

In the month of May we had 221 vehicles which were damaged or written-off in franchise dealerships. This was a drop of 30 over the previous month of April when there were 251 vehicles damaged in some way. This indicates that occasionally, even main dealerships get caught out when buying in previously written-off or damaged vehicles.

It is always a very good idea to purchase a full car history check before buying any used car, even from a main dealer.  Not all car checks are the same, though. A report by another history check provider may not show any damage alert.

During April there were 385 previously damaged vehicles sold at independent garages and in May the number of damaged or written-off vehicles was 408, an increase of 23 vehicles over the month of April.

During April there were 152 vehicles, with discrepancies of some kind or another but in May there were 160 vehicles displaying a discrepancy on a history check, which was a very slight increase of 8. In some instances a mileage discrepancy cannot be resolved and so a certain number of these vehicles are found to be 'clocked' after investigation.

The private car sector will normally have more problems associated with it and the biggest risk also when it comes to buying a used car. During the month of May there were 934 vehicles sold in the private sector which were previously damaged or written-off. This was a huge increase of 153 vehicles over the previous month when there were just 781 vehicles that had some kind of damage.

When it came to discrepancies, though, in the private sector there was a significant drop over the previous month. In April there were 117 vehicles with some kind of discrepancy on the record but there was a massive increase to 531 vehicles in April, an increase of 414 vehicles over the month of April.

Previous Article: Malahide Classic and Vintage Motor Show
Next Article: Checklist That You Need to Keep Handy During a VRT Check