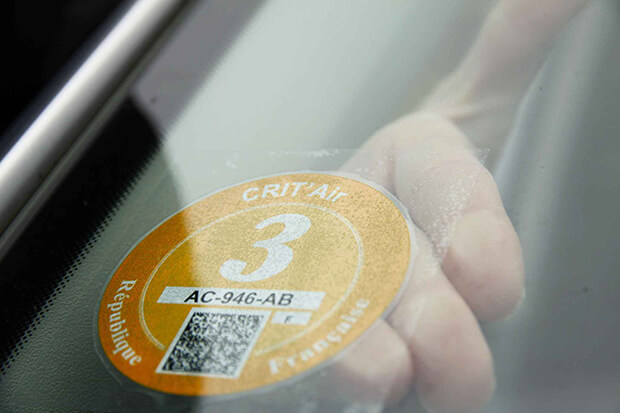 Motorists driving to France may need to be aware of the new vehicle emissions sticker system which has been introduced in the French cities of Paris, Lyon and Grenoble to tackle pollution.

The Crit’Air scheme came into force in Paris on Sunday, January 22. Under the new laws, all vehicles (cars, lorries, motorbikes and buses) entering these cities are required to display on their windscreens, a sticker, or vignette, according to the pollution category they have classed under.

For vehicles registered abroad such as vehicles from Ireland or the UK, they will also by law have to display these stickers when driving in French Cities.

There was a grace period for foreign vehicles up until two weeks ago on March 31, 2017, but now all vehicles are required to display the Crit’Air vignette.


What are the Crit’Air stickers for?

The stickers, graded from 1 – 5 work with current levels of pollution in the city, so at times of toxic smog for example, the city can ban all or selected vehicles – defined by their Crit’Air rating – from all or selected areas Paris.


Where does the ‘Crit’Air’ pollution zone apply in Paris?

The whole of Paris includes the Crit’Air environmental zone. The city area of Paris is defined without suburbs and includes the area inside the city’s ring road – the “Boulevard périphérique”. This is not an official motorway and is described as ‘E15’ in the Eastern part of Paris, ‘Bois de Boulogne’ in the Western part of Paris and ‘Bois de Vincennes’ in the South east part of the city. Click below to see a map. 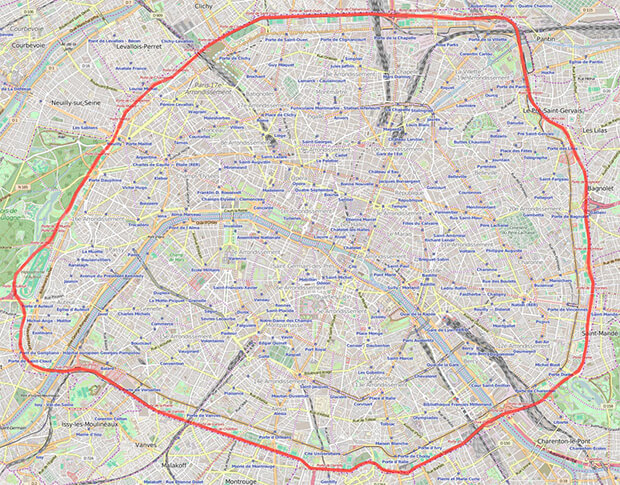 How much will the sticker cost?

The Crit’Air stickers cost around €3.70 including postage and come in six categories ranging from the very cleanest (Crit’Air 1) which are electric or hydrogen-powered vehicles to the dirtiest vehicles which are designated with (Crit’Air 6) vignette.

Irish and UK holidaymakers who are planning to take their cars to France this summer should be aware of the penalty for failure to display the new pollution sticker while driving in Paris, Lyon and Grenoble.

If it is not displayed you may receive an on-the-spot fine of between €68-135 (£58 to £117). The categories correspond to the six European Union emission standards for cars dating back to 1992 when Euro-1 was introduced.

So basically, anyone caught without sticker risks being fined up to €135 which could be a blight on your holidays, although we understand the French police are likely to be lenient in the short term.

The onus will be on Irish car owners to check the Euro emissions standard of their vehicle and visit the official Crit'Air website and apply for a sticker.

The following are the vehicle registration details required under French Law for anyone taking a vehicle into Paris, Lyon or Grenoble.

For the purpose of uploading a copy of your registration certificate onto the website, the file size has now been increased from 200KB to 400KB, which will make it easier for scanning.

This remains a relatively small size as 400KB is not large, so please remember to use photo editing software to optimise the file before attempting to upload.

When you have scanned or taken a photo of the document you could use the free online website to reduce the size of the picture such as, TinyPNG which uses smart lossy compression techniques to reduce the file size of your PNG or JPG picture files.

Photoshop and Paint are among the premium and free options available. Instant online optimiser sites are also available – such as imageoptimizer.net. Please note, we are not responsible for external sites.


How long will the Crit’Air sticker take to arrive?

Users who’ve applied for a sticker have reported the process to be ‘clunky’ but – ‘tentatively’ – successful. Expect the ‘actual’ sticker to take up to 30 days, but many users have reported it coming through within a week – despite scare stories on less-informed websites. A confirmation email should arrive within two weeks with a slip that can be printed off to prove the vehicle is covered.


Can I track my Crit’Air application?

Yes. You can enter your details using the following link to track the progress of your Crit'Air sticker.


Do you need to renew the sticker?

All Crit’Air stickers are valid for the lifetime of the vehicle, so you will never need to buy a new one for any individual car (as the law currently stands).


Where should I put the sticker?

The French authorities are very clear on this, and failing to stick your Crit’Air vignette in the right place could leave you open to a fine.

Official advice says the sticker must be placed in the lower right-hand corner of the windscreen.


Does the sticker apply to the car or the driver?

The Crit’Air is linked to the vehicle and not the driver. You’ll need one for each car you intend to drive in Paris, Lyon or Grenoble.


Road signs to look out for when driving in Paris?

Look out for these signs pictured below.

The red sign shows where a zone starts and the black sign indicates where the control zone ends.

It’s likely the signage will include another ‘Interdite’ sign, which will give more specific information on the Crit’Air restrictions that apply.

If the vehicle is restricted, do you need to leave the city?

No, the restrictions apply to travel only.

As long as you have a Crit’Air sticker, you can leave the vehicle parked in the city during periods its use is restricted due to high levels of pollution.

If your car is a pre-1996 vehicle then you will not be assigned a category.

Be aware, this means you will not be allowed to drive your vehicle in the city’s Crit’Air zones between 8am – 8pm Monday to Friday.

This means – along with older petrol and diesel cars that didn’t get a sticker in the first wave – diesel cars registered before January 1, 2001, will also be banned from entering the city 8am – 8pm Monday – Friday.


Will disabled drivers need a sticker?

No. Please refer to The Crit’Air exemptions page on the official website which says:

The European Union emission regulation standard for new passenger cars and light commercial vehicles was originally specified in EU Directive 70/220/EEC with a number of amendments adopted through 2004 but in 2007 the EU Directive was repealed and replaced by Regulation 715/2007 (Euro 5/6). Some of the important regulatory steps implementing emission standard for light-duty vehicles were:

We would recommend that drivers organise their Crit’Air vignette well in advance of any travel dates so they do not run the risk of driving without one.

If your vehicle has high CO2 emissions, you may not be able to drive your car in the city on certain days where pollution is particularly high and also it is planned in the future vehicles may be banned from driving in Crit’Air areas on certain days based on which sticker have, or which emissions category they fall into.

Somewhere in the region of 600,000 vehicles are driven in the French capital every day and pollution has been so severe on occasions that the authorities have banned vehicles from driving in the city based on whether their number plates are odd or even.

Paris, along with Madrid, Athens and Mexico City also have wider plans to ban all diesel vehicles from the city by 2025. 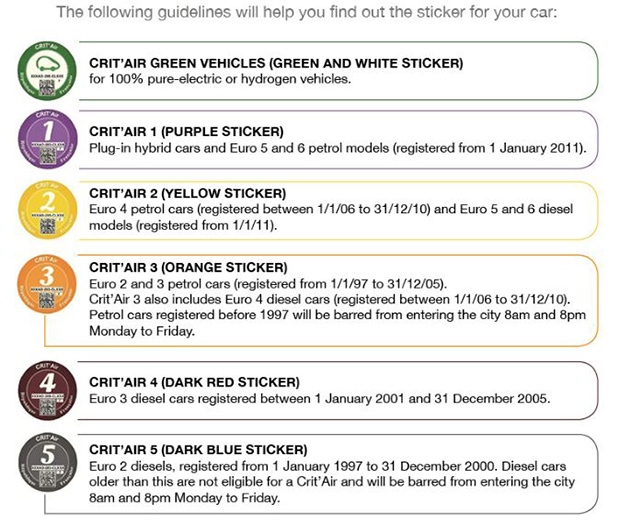 Mayor of Paris is no fan of cars

Anne Hidalgo who is the mayor of Paris has made no secret of the fact that she is no fan of cars and has made it clear she’ll be making life difficult for drivers. She has spoken of eventually banning all diesel motors from the city’s streets. Speaking to journalists, she said:

Previous Article: Most over 50's in rural areas rely on cars for transport
Next Article: Revenue calms the fears of Northern Ireland car dealers