Research conducted by MyVehicle.ie revealed the top 10 most popular used cars sold by independent and franchise dealers across Ireland for September 2016 as well as the vehicles that are shifting the quickest.

MyVehicle.ie data shows what was in demand in the month of September that is being sold by independent and franchise dealers. This is a good indicator of what Irish people are looking for in terms of second-hand cars and what exactly they are buying. This data may be useful for potential vehicle buyers, giving them an insight into what the most popular cars are. 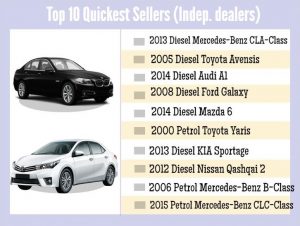 2012 & 2013 cars are the most sold used vehicles by independent dealers in July. This may suggest that more and more people across the country are trading up their car after 3-4 year period which may not have been the case a couple of years ago, opting for a trade-in after a longer period of time.

The Ford name is dominating the independent table with 4 Ford Focus’s in the top 10 and 1 Ford Mondeo, coming in second, third, fifth, ninth and tenth on the list. People are sticking to the trusty vehicles they feel will do a good job for years to come. Makes that also make the list include, Opel, Volkswagen and BMW. The quickest top 10 sellers are not the most popular cars sold in Ireland. None of the quickest sellers makes it to the top seller's list. 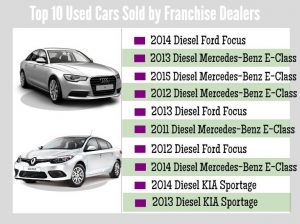 In the franchise, dealers top 10 list we see a similar picture with the most popular vehicle being a 2014 Diesel Ford Focus. The Diesel Mercedes-Benz E-Class comes in a total of 3 times on the list, being the second most popular and followed by the 2013 Ford Focus. Comparable to the independent dealers, the 2014 Diesel KIA Sportage is also shown.

None of the best selling vehicles for franchise dealers materialises on the top 10 quickest sellers with the 2009 Diesel Citroen C4 Grand Picasso, 2012 Petrol Fiat 500 and the 2014 Diesel Peugeot 2008 taking the first three spots. 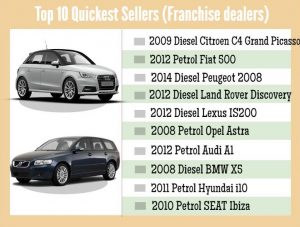 MyVehicle provides the general public with more information than any other company can at a more cost-effective price. To get your vehicle history check report simply visit our website at www.myvehicle.ie

Previous Article: A Guide to Improving Your Vehicle's Fuel Consumption - Quick and Easy tips to fuel efficiency.
Next Article: Ireland could have free public transport by 2030