Tesla cars get a big update

Tesla cars got a big update a few days ago. There has been some hype about this update for the past few months in the Tesla drivers world and version 9.0 has been rolled out by the Autonomous EV company.

Even though this has been a well-anticipated update, they have withheld one of the bigger expected features, the one that allows the Tesla autonomous autopilot system handle passing cars and automatically detect motorway interchanges. This anticipated feature is being delayed for now.

So what’s new in the update? The Newer Teslas (those built after August 2017) can now use the built-in forward-facing camera also as a Dash camera. That means that the Tesla driver can save some footage of what’s going on in front of your car. By hitting the new dash cam icon, the camera will save the last 10 minutes of footage.

There’s a new UI (User Interface) on the centre display panel on all Tesla cars which cleans up the display while making the user experience more consistent between all three Tesla models, the S, the X and the 3.

Up until now, the cheaper Model 3 cars had not had a web browser on the centre display, but with this latest update, it joins the Model S and X which has had a web browser for a while.  The display will also add a calendar and real-time energy-monitoring display tool.

Turn-by-turn now shows more information (particularly about your next steps), and you can tell the car whether or not you’re currently allowed to use certain lanes, for example in the US it will give drivers the option to use or not to use the carpool lane and factor in different routes instead. 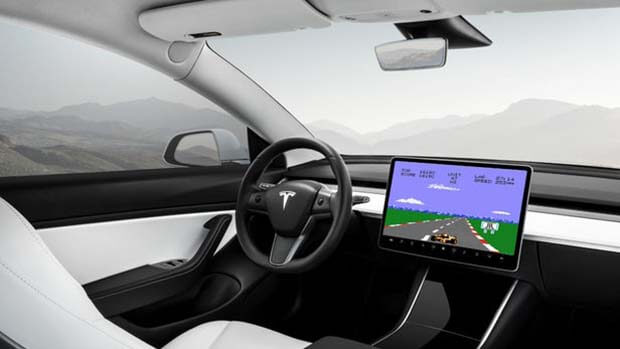 The Autopilot now curtails full-speed acceleration from low speeds when there’s something in front of the car. This is helpful if the car is being parked in a carpark, for example, were the Autopilot will try to stop the car from careering into a wall if the driver mixes up the accelerator and the brake or mistakenly thinks they are in reverse.

The new update also allows the driver to push a navigation destination to the car via the Tesla mobile app, saving you the effort of punching it in once you’re in the driver’s seat. Basically, this means you can input your destinations into the app in the comfort of your own home and when you get into the car, the information can be then automatically transferred or pushed to the vehicle's navigation system.

Apparently as well, some Atari games are now inputted on the system for entertainment purposes. Elon Musk said that they would sneak these in as Easter eggs. Apparently in there now, “if you can find them.”

An amazing feature is the new 360º visualization. A birds-eye expansive view of the car, as well as the vehicles around it, is now available to the driver by utilising all eight external cameras into one big-meshed image.

Musk previously announced before this, to expect to Navigate on Autopilot to go live with the latest update, greatly improving the Autopilot’s abilities on motorways. The driver will still have to keep their hands on the wheel, but it will now suggest lane changes, handle motorway interchanges and take motorway exit ramps automatically.

Some more important features are planned but according to Musk, they are not quite ready yet, as it is extremely difficult to achieve a general solution for self-driving that works well everywhere. This means that Navigate on Autopilot will be run in “Shadow Mode.” In other words, all of the new logic and calculations will be running silently in the background, but Autopilot won’t actually be utilizing it.  The system will be crunching the numbers and double checking that everything to do with navigation on autopilot will be safe.