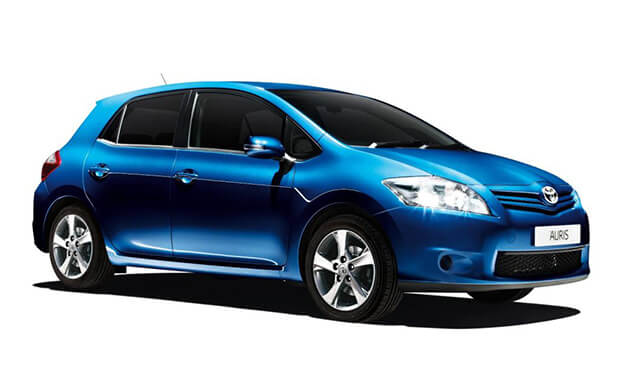 Toyota had a plan to replace the extremely popular Corolla so it decided that the new car needed a brand new name to show how different and exciting it could be. The Toyota Auris was born.

It isn’t all that different from the Corolla in many respects except for the new shape and it’s probably not any more visually exciting. The Auris had a facelift early in 2010 when the Japanese family hatchback adopted a new front bumper with a redesigned grille and a reprofiled rear.

The Toyota Auris is reliable, efficient and practical and a great choice if you simply want fuss-free family motoring.

This family-friendly hatchback does everything very well but it’s fair to say that it won't stand out from the crowd. In saying that, it is a safe, sensible choice for family driving.

The hybrid version of the Auris will be the cheapest to run, with a fuel economy of up to 80.7mpg and CO2 emissions of only 79g/km, thanks to technology shared with the Toyota Prius.

If the hybrid is not what you are looking for or the continuously variable transmission (CVT) automatic gearbox isn’t your cup of tea, Toyota’s 1.2-litre four-cylinder petrol may be worth taking a look at. It feels far more lively, has a standard six-speed manual gearbox, can get to 62mph in around 10 seconds and manages 58mpg, while CO2 emissions of 112g/km of add up to £30 in road tax at current rates.

Diesel engines are either the 1.4-litre or 1.6-litre with 111bhp, with the latter being the better bet if you need more power. It can get from 0-62mph two seconds quicker and still returns 67mpg.

Each of the four engines offers competitive running costs, thanks to the inclusion of stop and start on 1.33 VVT-i models. For example, the 1.33-litre engine produces CO2 emissions of 135g/km and achieves 55.4mpg on the combined cycle. The 1.4 D-4D engine emits 125g/km of CO2, and delivers 67.3mpg while the most popular engine, the 1.6-litre Valvematic unit, emits 146g/km and can achieve 52.3mpg.

The Auris will drive exactly as you want it too, with good levels of grip, tidy handling and a comfortable ride on most road surfaces. It may not excel or excite you in a dramatic fashion but it's reliable and roadworthy.

The steering feedback could be a tad less dull but in terms of driver enjoyment, the Auris comes in spritely behind the Ford Focus and Volkswagen Golf. The petrol engines can get quite noisy when extended and the diesel engine as you can guess is quite vocal on startup and at low speeds but will similarly quieten down considerably as the speed increases. Believe it or not, the size of wheel fitted to the Auris can vary the noise in the cabin, as the larger the alloy wheel, the more road noise gets transmitted inside.

The Auris comes in petrol, diesel or hybrid technology under the bonnet. The 1.4-litre diesel engine actually boasts the same 80.7mpg economy as the hybrid.  The diesel may be too frugal for some and in that case, the petrol-electric hybrid Auris is the model to go for.

With a choice of two petrol engines, a single diesel engine and a petrol-electric hybrid, all models come with a six-speed manual gearbox as standard. The 1.6-litre petrol and 1.4-litre D-4D diesel engines are also available with a six-speed automated manual gearbox. The most popular engine is the 1.6-litre Valvematic unit which can generate 130bhp with a top speed of 121mph, accelerating from 0 to 62mph in 10 seconds.

The diesel engine, by comparison, produces 89bhp with a top speed of 109mph and can accelerate from 0 to 62mph in 11.9 seconds with the manual gearbox, and 14.7 seconds if the automated manual gearbox is chosen.

Comfort is one of the main strengths of the Auris, along with plenty of space for two adults sitting in the back, or three children. The Auris is well built and the interior is as a Volkswagen Golf.

One of its strongest features is its rising centre console that puts all of the controls in easy reach of the driver. Some owners complain that the gear lever is set too high and too far forward, which means it may not make for the most comfortable driving position. The rest of the dashboard is decently laid out, with well-thought out logic and clear dials both during the day and at night.

The boot measures 360 litres, which is par for the course compared to rivals. In all, it is a very practical car with a decent amount of space in the boot but it’s not the leader in its class.

When Toyota designed the Auris, it came up with some clever ideas, like the flat floor, which makes the most use of the available space. Thanks to the conveniently flat floor, the Auris is one of the few C-segment cars where it is comfortable to fit three passengers in the back.

There is plenty of legroom both in the front and also in the rear with plenty of generous headroom. As an added bonus, the rear seat back can be reclined too, for added comfort. The driver’s seat is also very comfortable and can have plenty of adjustment.

Traditionally, Toyota’s reliability has been excellent and their cars do live up to the endorsement as “the best-built cars in the world”, despite the recent spate of recalls that have afflicted the brand.

Again, going on Toyota’s build quality, the Auris has a hard-won reputation for reliability and safety. The Auris scores well for safety, with a five-star Euro NCAP crash-test result and lots of standard safety kit. Features include ISOFIX child-seat mounts on the outer rear seats, along with a system to alert you of low tyre pressures and a seatbelt reminder.

The Auris feels like a quality product and is built to a good standard, with decent materials that feel like they will stand up well to the test of time.

You will never go wrong buying a Toyota Auris, despite its lack of excitement. Still, it is an extremely reliable car, has plenty of safety kit, and has an excellent five-year warranty if you buy from new. It’s also built to a very high standard, too. For some, that’s all that matters.

Things to look out for

Not much to be worried about with the Auris. While Toyota has suffered a few setbacks in recent years with various recalls, you can be sure that your Toyota Auris is reliable, safe and relatively cheap to run, despite the fact that it may not get your pulse racing.

Previous Article: Ford names Jim Hackett as new CEO in push to build self-driving cars
Next Article: Why you shouldn't trust a car history check from a used car website that is advertising the vehicle for sale