Car News /  Electric Vehicles /  Another downfall for electric cars: Police patrol forced to give up chase after running out of charge

Another downfall for electric cars: Police patrol forced to give up chase after running out of charge 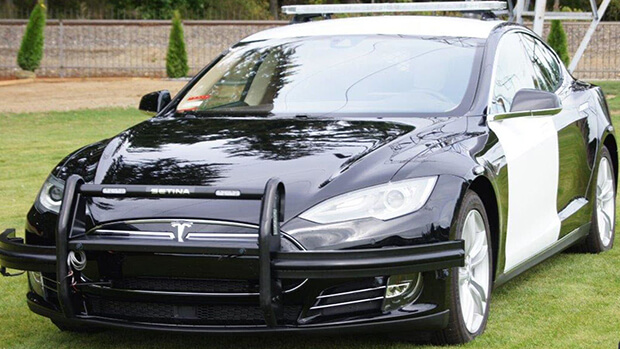 U.S. Police officer forced to give up a chase as his Tesla electric patrol car runs out of charge

San Francisco police officer, Jesse Hartman was in hot pursuit of another vehicle when he called to dispatch to say he only had six miles of power left.

The Fremont began his shift at 2 pm in the afternoon and had been patrolling in his Tesla when the pursuit started at 11 pm.

A Police Department spokeswoman, Geneva Bosques, said officer Hartman was chasing a suspect wanted in connection with a crime in Santa Clara, California.

The officer signalled the driver to stop but he failed to do so, resulting in a high-speed chase until the Tesla battery ran out at which time members of the California Highway Patrol (CHiPs) took over the chase.

Eventually, the pursuit was called off due to the reckless way the suspect was driving. The car was later found abandoned in San Jose, California.

It was unclear why the Tesla Model S 85 did not have a full battery when he started work. When the Tesla patrol car is fully charged it usually has around 40% to 50% of power left once a shift is over. Ms Bosques said the cars run out of power while out on patrol "from time to time".

"Especially if an officer returns to the station to take a report and then they never go back out in the street.

"The officer was monitoring the charge and responsibly notifying everyone of its status during the approximate 10-mile pursuit.

"We had other units behind the Tesla in the pursuit to take over and the CHP was also responding.

"Pursuits on the freeway are usually pretty short in duration, as we turn them over to CHP as soon as they get to our location."

Fremont Police have been testing Tesla electric cars on a pilot programme over the last six months with the force keeping track of all the relevant data. The Police spokeswoman went on to say:

"We have no written policy regarding gas or charging, but the general guideline is that it should be half full at the beginning of the shift, which this car was."

"This is the second pursuit the Tesla has performed well in.

"This one instance does not in any way change our feeling regarding the performance of the vehicle for patrol purposes.

"So far the car is meeting or exceeding our expectations. We are still in our first six months of the pilot program and we're keeping track of all the data."

Previous Article: What will happen to electric cars when they reach their end of life?
Next Article: Why you shouldn't trust a car history check from a used car website that is advertising the vehicle for sale