What are the benefits of owning an Electric Car? 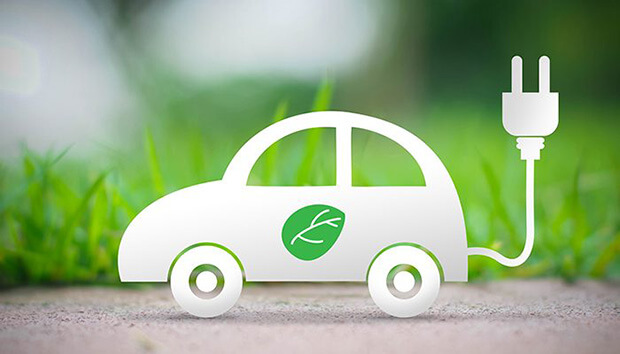 What is an Electric Vehicle?

For a certainty, electric cars are much cheaper to run than a traditional combustion engine type vehicle. Not only are electric cars great on your pocket but they are obviously better for the environment as well. Granted, most people are more concerned about price and cost saving and that is understandable but the early adopters of EV Technology are interested in the greener aspects of the vehicle.

Electric vehicles emit zero tailpipe ‘greenhouse gas emissions’, which does not destroy the air quality the way diesel and petrol engines do. Electric vehicles not only lesson pollution in our towns and cities, but they also reduce noise pollution.

Benefits of Electric Cars for Customers

Benefits of Electric Cars for Businesses

Benefits of Electric Cars for the Environment

Electric vehicles are environmentally friendly and can offer a real opportunity to reduce the carbon output of the transport sector simply because they emit zero exhaust pipe emissions.

Generating electricity from renewable sources is a growing trend and offers another route towards carbon neutral motoring. For example, most people would generally charge their ecars at night when a higher proportion of electricity is generated from wind.

Another benefit of electrifying the transport sector is that it improves air quality in our cities by removing diesel fumes which the World Health Organisation (WHO) in 2012 classed as a Group 1 carcinogen.

A pure electric vehicle is powered solely by batteries which power the electric motor which turns the wheels and drives the car. The battery is recharged by plugging into charge points. It can also be charged by regenerative braking while driving through the motor/generator.

The battery is recharged via regenerative braking and when you take your foot off the accelerator and coast. The vehicle’s momentum (kinetic energy) is turned into electricity that recharges (regenerates) the battery. A regular hybrid vehicle can operate in electric-only (commonly referred to as EV) mode when there is fuel in the tank, but it is not designed to run without it.

It is also a fact that when the EV mode is engaged, the battery power is very limited and you can usually only drive for around 2km before the ICE engine automatically kicks in. The engine will also start when a greater amount of power is needed, for example when overtaking or once you get up to a certain speed.

A plug-in hybrid combines the benefits of a traditional hybrid and a battery electric vehicle or BEV.  A Regular Hybrid has as its main power source a combustion engine with the aid of battery power. As a result, plug-in hybrids need larger batteries as you can drive in EV mode for greater distances usually around 20 to 60km depending on the model.

The plug-in hybrid battery is charged via regenerative braking as well as by plugging it in. Currently in Ireland it is free to charge your car up using public charge points but most people who own a plug-in hybrid will charge their battery at home overnight using the cheaper night rate.

When the battery runs out of charge the engine kicks in, although not all plug-in hybrids use their engines the same way. Some are only activated after the battery drains and some kick in when extra power is needed even if there is charge in the battery.

So which is better?

The plug-in hybrids’ use of a larger battery lets you go farther on electric power alone, which generally speaking offers a cost advantage as you use less fuel. This ability makes plug-in hybrids more expensive than traditional hybrids which have as their main source of power the ICE. The plug-in is more expensive because of the cost of the batteries. It does help that the Government provides a grant of €5,000 available for qualifying plug-in hybrid vehicles when purchased privately and a €2,500 VRT rebate. Obviously, the bigger the battery capacity the longer the range and fuel economy is important also. This is the reason why most plug-in hybrids are generally more efficient than regular hybrids. 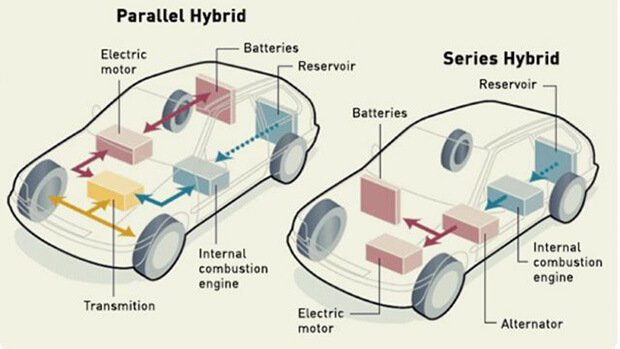 This is the simplest hybrid configuration. Hybrids that use a series drivetrain only receive mechanical power from the electric motor, which is run by either a battery or a petrol or diesel-powered generator. The vehicle can be powered by both electricity stored in the battery or a petrol or diesel engine. In a series hybrid, the electric motor is the only means of providing power to turn the wheels. The motor receives electric power from two sources, either from the battery pack itself or from power which has been built up and contained in a generator which is run by an Internal Combustion Engine (ICE). An electronics system determines how much of the power comes from the battery up to a certain speed or from the ICE. Both the ICE and regenerative braking recharge the battery.

Like a Series Hybrid, a Parallel Hybrid is also powered by a combination of electricity stored in a battery and either a petrol or diesel engine. However, in a parallel hybrid, both the electric motor and Internal Combustion Engine (ICE) provide power to turn the wheels and drive the car. In simple terms, hybrids with parallel drivetrains, the electric motor and internal combustion engine can provide mechanical power simultaneously. Series/parallel drivetrains enable the engine and electric motor to provide power independently or in conjunction with one another. An electronics system determined by driver demand at any speed decides how much of the power comes from the battery or from the ICE. Both the ICE and regenerative braking recharge the battery.

The Hybrid drivetrain can also be configured in Series/Parallel where both concepts can be merged. By combining the two designs, the engine can both drive the wheels directly (as in the parallel drivetrain), and be effectively disconnected, with only the electric motor providing power (as in the series drivetrain). The Toyota Prius helped make series/parallel drivetrains a popular design. 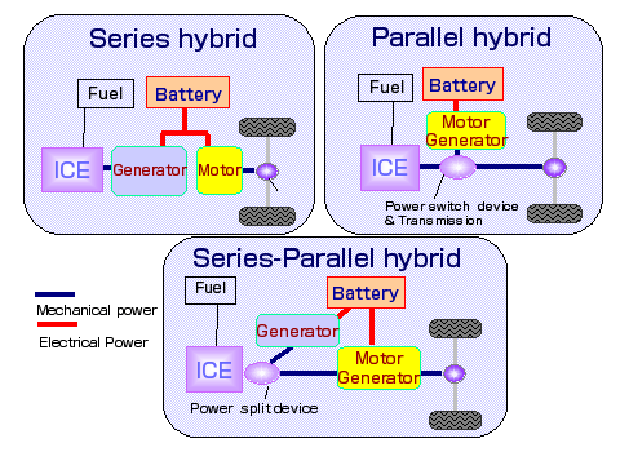 For more information on the specific benefits and incentives you can go to www.seai.ie and www.nationaltransport.ie ESB list of e cars on the market https://www.esb.ie/docs/default-source/ecars/list-of-ecars-available-on-the-market

Previous Article: Amazon Alexa for Car Entertainment Systems
Next Article: Are you entitled to a Motor Tax refund?