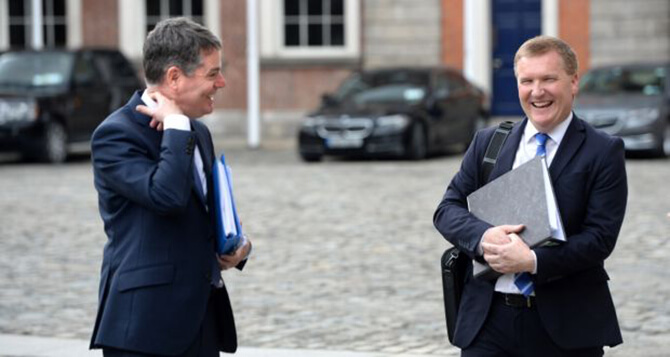 The Budget is expected to hammer regular motorists with increases in motor tax, Vehicle Registration Tax (VRT) and fuel.

The Finance Minister, Pascal Donohoe has announced that a “significant amount of public money is being used to tackle the coronavirus and the threat of Brexit.”

The Minister also  explained this morning that governments around the world are being encouraged not only to tackle Covid-19 but to spend in order to keep the economy going.

How they plan to spend, when there is a budget deficit of around €21 billion next year is anyone's guess. The only way you can have a deficit and still spend is to extract more in taxes from motorists.

“If you take it that we’ve run a budget deficit of €21 billion this year then you’re probably looking at an additional borrowing amount for the exchequer for this year and next year in the region of €50 billion.

“So, it’s a very significant amount of public money is being used to tackle the coronavirus and indeed the threat of Brexit.

There is already so much uncertainty with Covid-19 and also surrounding Brexit that the population is becoming increasingly worried about their future.

The Finance Minister has ‘assured’ us that the budget has specifically been put in place to address the uncertainty. He said:

“It aims to recognise where we are and by drawing upon the strengths that our economy has and the qualities that our society has creates a really important and strong framework for our country for the rest of 2020 and for 2021.

“It’s about how we protect lives and it’s also about how we put the resources in place to protect and secure livelihoods and that's what the budget is about today.”

There is no doubt about it that motorists are being discouraged from driving their cars. It’s very evident that the budget will hit motorists hard, as petrol and diesel is set to rise from Midnight tonight and an increase in motor tax and VRT as well.

The Irish Government plan is to discourage people from driving cars with high emissions and so motor tax is expected to increase by up to €50 a year. Two million cars being taxed an extra €50 equates to €1 billion euro right there, so it doesn't take a rocket scientist to figure out the strategy.

There are savings to be had though, if you opt for an overhyped and overpriced electric vehicle, as taxes are due to decrease for these zero-emission cars.

A recent Tax Strategy paper prepared by the Department of Finance, outlined new proposals which will be adopted and enacted, suggesting that there should be an overhaul to the entire motor-tax system.

The increases in motor tax are being introduced to accommodate all the  climate action commitments.

The government has promised to incentivise motorists to move away from higher-­pollution vehicles and punitively sanction drivers of older more polluting vehicles. Some of the changes may include:

It is expected that the old system of motor tax will be entirely replaced by a new model which takes emission rates into account more accurately.

This will mean that the present Government subsidies for new electric cars and plug-in hybrids will be phased and lower-emission vehicles will have less VRT,  halved to 7 per cent in many cases.

Heavy-emission petrol and diesel cars will be hit the hardest with higher VRT.  Vehicle Registration Tax for ‘Gas Guzzlers’ at the end of the ­spectrum will sky rocket.

It could very well mean that the average family car will increase in price by as much as €1,000 and a huge €7,000 increase for some family SUV’s.

At the moment, there are subsidies available for electric cars such as a €5,000 rebate from VRT but this is due to run out at the end of the year. There are calls for this to be extended.

As well as the VRT rebate for EV’s, you can also get a €5,000 euro grant from the government-funded SEAI (Sustainable Energy Association of Ireland.

Right now, the full VRT ­concession will only apply to cars costing up to €40,000 and will not be much advantage for more expensive cars costing more than €50,000.