Conor McGregor up in court for being unlicensed and uninsured 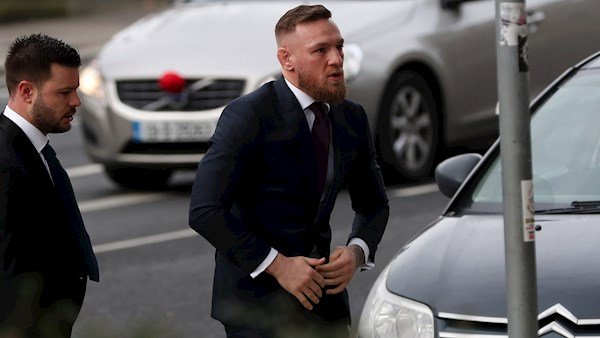 For the second time in just three weeks, Conor McGregor has appeared in court on road traffic offences.

At the request of the Gardaí, the Judge, Geraldine Carthy struck the case out of court at after he produced his documents in advance of the hearing.

The fighter was driving on Grove Road in Rathmines on July 10 when he was stopped by the guards who subsequently accused him of driving without insurance or a licence and also for failing to produce them, when requested, at a garda station within 10 days of being stopped.

When McGregor arrived at the courts, he was flanked by his minders, to the waiting crowd of journalists and photographers.

Before his hearing, he was waiting just outside the packed courtroom in consultation with his solicitor until his time to be called.

When he entered into the public gallery he was seen smiling and chatting with RTE's crime correspondent Paul Reynolds.

His case was then called and the solicitor stood up and told the Judge that he appeared the accused, who then came forward from the back of the courtroom.

On behalf of the prosecuting guard,  an application was made for the case to be struck out, at which point it was with Judge Carthy saying, "Strike out all matters,", after which McGregor nodded and murmured "thanks," and making his way out of the courtroom.

Only three weeks ago, at Naas District Court, McGregor was banned from driving for six months and fined €1,000 for speeding after being caught driving at 154 kph in a 100 kph zone on the N7 in Co Kildare.

At that last court appearance, Judge Desmond Zaidan noted that he had 12 previous motoring convictions even going as far as saying that McGregor was fortunate not to be charged with careless or dangerous driving.

He did plead guilty though to breaking the speed limit at Blackchurch on the N7, Kill, Co Kildare on October 11, 2017.

It's not the first time that he has been in trouble with the law as in November last year he was fined €400 for speeding in a separate incident on the Naas Road after he pleaded guilty at Blanchardstown District Court.

Previous Article: Teenager Quoted Almost €19,000 to Insure A Car
Next Article: Why you shouldn't trust a car history check from a used car website that is advertising the vehicle for sale