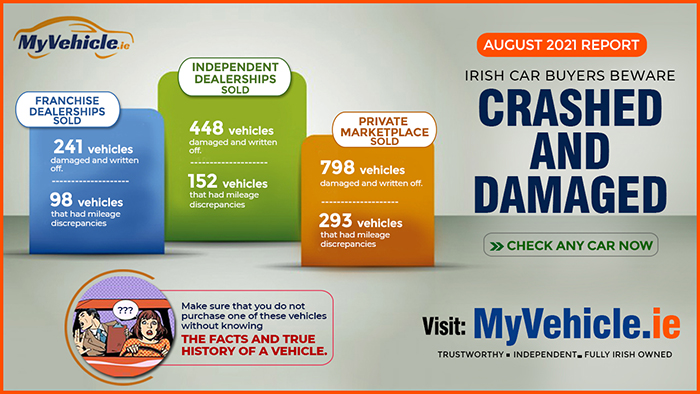 The latest crashed and damaged cars report has been released by MyVehicle.ie for the month of August 2021. We hope that you are not one of the unfortunate buyers who bought one of these previously damaged vehicles.

During August, 241 vehicles were discovered to be written-off. The good news is that the numbers are down by 56 compared to the month of July.

It is always a good idea to purchase a used car from a main dealer. Sometimes, though, even main dealers can get caught out and sell a used car that may have had previous undesirable history such as damage or even a

Make sure to get a full vehicle history check, even if you are buying a car from a main dealer. Not all car checks though, are the same. MyVehicle.ie has more damage data and alerts than any other supplier in Ireland.

It has become known that some dealers buy a vehicle on foot of a trade report by VMS (Vehicle Management System), our parent company, and then sell that very same vehicle to a member of the public with an inferior report from another history check supplier. That report by another history check provider may very well not show any damage alert at all on the vehicle.

Franchise dealers had 98 vehicles for sale which were discovered to have mileage discrepancies during August. This is down by 17 from the previous month. This shows the importance of running a car check even when you are buying from a main dealer.

During the month of June we actually saw a drop in damaged vehicles sold at independent garages down from 599 in June to 448 in August. This was a drop of 151 vehicles crashed or damaged sold at Independent dealerships.

Again, when buying any used car, always get a car check. Never just take a seller's word for it. A dealer may say that the car “just had a tip”. This may very well be code for; ‘it might have crashed and damaged before, but I have told you just enough to cover myself and I hope it doesn’t come back on me’.

As with car damage, there was also a drop in the number of cars showing mileage discrepancies during August. On sale at Independent dealers were 152 vehicles, (76 down from June) showing some kind of mileage discrepancy displayed on the report.

The private car sector is where you will normally find the biggest problems and the biggest risk but during the month of August there was a massive drop in vehicles sold which were damaged.

Remember that you have almost zero chance of any comeback or consumer rights after you have bought a car from a private seller and subsequently find out that there is an issue.

Previous Article: New car sales increase during August
Next Article: Damaged and Crashed Car Report for the Month of May