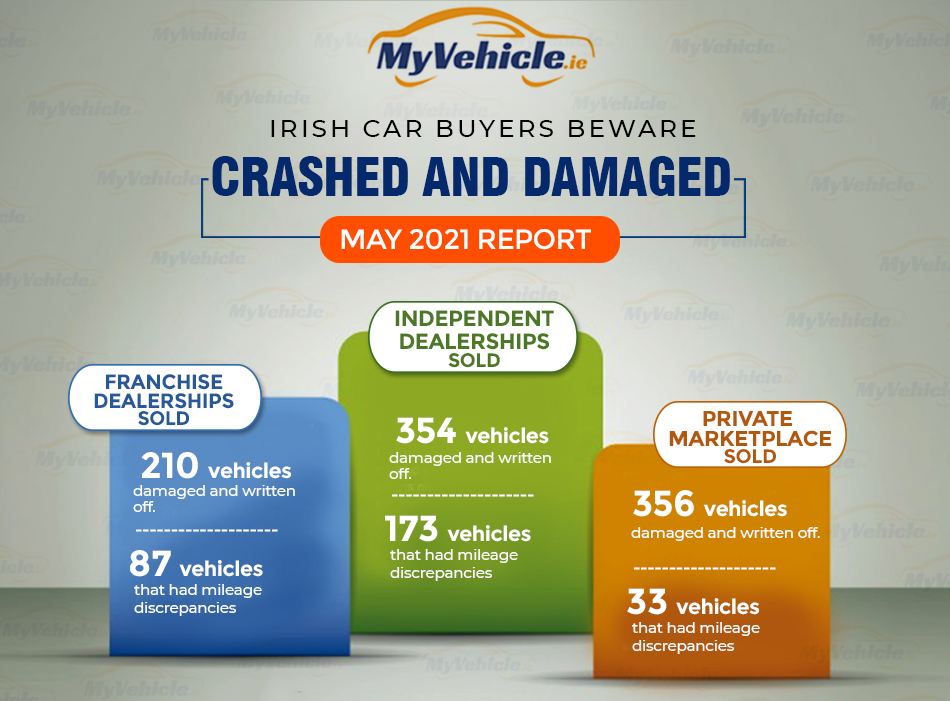 MyVehicle.ie has released its latest damaged and crashed cars report for May 2021. It is certainly hoped that you are not one of the following motorists that has bought one of these cars.

Usually buying a car from a main franchise dealer is a wise decision but sometimes even main dealers get caught out and can pass on a damaged car or a vehicle with mileage discrepancies.

In many cases, Franchise dealers are using history check suppliers that simply do not have the same damage data that is currently held on MyVehicle’s extensive databases. When they run a report with some other suppliers, they can have a false sense of security as these suppliers may not have access to the same damage information on the vehicle.

It is important to also be aware that some dealers are buying vehicles on foot of our reports and then selling the vehicle to the public with an inferior report from another supplier which may not be displaying damage.

The latest shocking statistics below from MyVehicle.ie reveals that during the month of May, 210 vehicles were discovered to be written-off.

Franchise dealers had for sale 87 vehicles which were subsequently discovered to have mileage discrepancies of one kind or the other. This is why it is so important to always run a full car background check even if it comes from an authorised main dealer.

Many of these sales are not just mistakes or some oversights or because a trader forgot to run a vehicle check. In many cases, these cars are being deliberately sourced as damaged and categorised vehicles and sold on to unsuspecting car buyers who may not even know about car history checks.

Many traders will say to their customers regarding visible damage, that “it’s just a tip”, which is their code for; ‘it might have crashed before and was damaged but I’ve told you enough and I am hoping nothing comes back on me’.  This kind of unscrupulous car trading is far too prevalent in the used car market.  The only way to fend off these tactics is to have your own car history check.

Independent Traders sold 173 vehicles in May with some kind of mileage discrepancy displayed on the report.

In many more instances these discrepancies cannot be resolved and are found to be 'clocked' after investigation.

Buying a car privately is where car buyers will have the biggest problems and are taking the biggest risk. It is so important to run a background check on a car if it is being sold privately because you have almost zero chance of any comeback or consumer rights after you have bought the vehicle.

The advice is to carry out all due diligence when buying a used car from a private seller. Many private sellers have not even heard of the existence of a car history check, and so when they bought the car from the previous owner, they most likely did not check the car’s background. The car could have been previously damaged but they may be blissfully ignorant of the fact. If you buy the damaged vehicle without background checks, you simply repeat the cycle.

During the month of May, 356 vehicles sold privately were previously damaged or written-off.

This means that every single day in May, approximately 12 written-off vehicles were sold privately. Ask yourself, did I buy one of these vehicles last month?

Are you one of these unfortunate buyers?

Make sure that you do not purchase one of the vehicles without knowing. Issues and more. It is best to do it sooner or later and even after you have purchased the vehicle just in case you need to contact the seller for quick resolution.