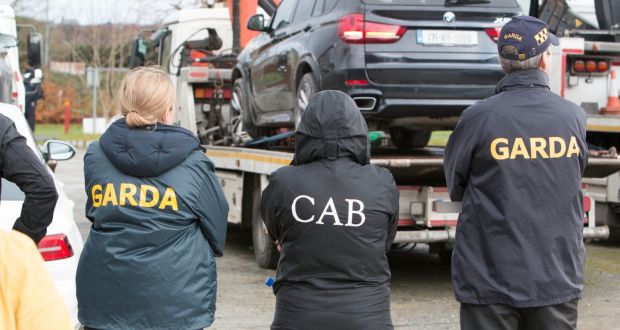 The Criminal Assets Bureau has seized a fleet of 114 cars in a major raid on a motor dealership in Limerick and now wants to sell these vehicles.

The multi-million euro fleet will be sold by CAB in order to “preserve their value” as they pursue the matter with this dealership in the High Court. The Criminal Assets Bureau allege that these vehicles are the proceeds of crime?

In the meantime, Justice Carmel Stewart has adjourned the case until next month for the application on the sale of the vehicles to be heard.

The cars are seen by CAB as “depreciating assets.” and “the bureau is anxious to get the sale of the cars dealt with as quickly as possible” due to the cost of keeping them.

When the 114 cars are sold, the proceeds will then be preserved, pending the outcome of the overall case.

They might have a job selling 114 cars in a quick time-frame and they recognise that we “heading into the holiday period” when cars are not sold.

The actual raid by the Bureau took place in March and the estimated the value of the cars combined is 2.8 million euro, making it one of the biggest seizures in CAB's 20-year history.

Some of the luxury models seized were Mercedes, BMW, and Audi. In the same operation, CAB raided two houses in Limerick, another garage in a Tipperary town, an accountant's office in Limerick city and two solicitors' offices in Co Limerick.

The Criminal Assets Bureau (CAB), one of the worlds most powerful policing agencies with regards to seizing assets was established in 1996 and they are used by the Irish State to carry out investigations into the suspected proceeds of crime.

CAB identifies all criminal assets of persons involved in criminal activities and then takes appropriate action to deprive or deny those persons of the assets and the proceeds of their crimes.

The legal basis for this action is the Proceeds of Crime Acts 1996 to 2016, and Social Welfare and Revenue legislation.

The agency works closely with other international crime investigation agencies such as the European Commission and Camden Assets Recovery Inter-agency Network (CARIN) which is an informal network of law enforcement agencies, who share knowledge and information on criminal assets.

The interesting thing about CAB is that it is not a division of the An Garda Síochána but rather they are an independent agency which has many of the powers given to the Gardaí.

The members of the CAB are taken from the ranks of the Gardaí and the Chief Bureau Officer holds the rank of Chief Superintendent. All members of the Criminal Assets Bureau retail their original powers and have the same direct access to information and databases that their original organisations have. In the 2011 CAB Annual Report, the Minister for Justice and Equality stated:

"The work of the bureau is one of the key law enforcement responses to tackling crime and the Government is very much committed to further strengthening the powers of the bureau through forthcoming legislative proposals."

"The Annual Report provides an insight into the workings of the Bureau and highlights the advantage of adopting a multi-agency and multi-disciplinary approach to the targeting of illicit assets. The Bureau is an essential component in the State’s law enforcement response to serious and organised crime and the Government is fully committed to further strengthening its powers through future legislative reform."

In the first ten years of its existence CAB collected €89 million in taxes alone and continues to seize criminal assets for the State. The agency has a staff of 82 made up of members of An Garda Siochána, the Revenue Commissioners, civil servants from the Departments of Justice and Social Protection. The officers and staff of CAB are protected with statutory anonymity.