Crashed and Damaged report for July 2021 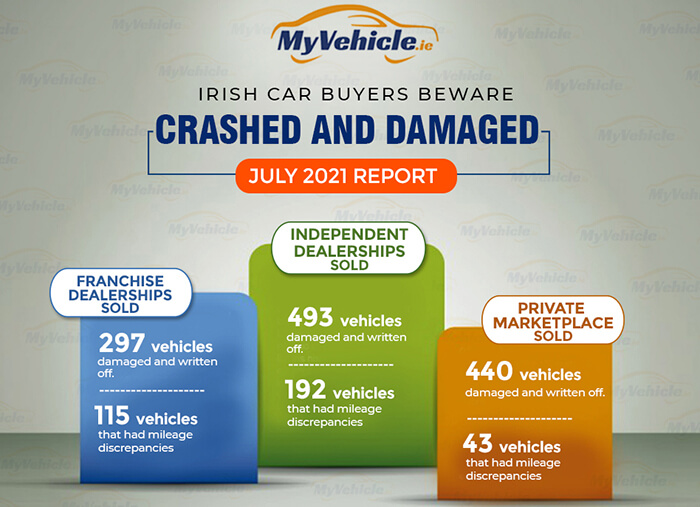 MyVehicle.ie’’s crashed and damaged cars report for July 2021 has been released and we hope that you are not one of the unfortunate consumers that bought one of these vehicles last month.

It is by far less risky to buy a used car from a main dealer than from a private sale but sometimes even main dealers can get caught out and can sell you a car that may have been previously damaged or even written-off.

Even if you are buying a used vehicle from one of the main dealers, you should always run your own full vehicle history check, even if they offer you a car check of their own. It is good to remember that not all car checks are the same and car check suppliers, such as MyVehicle.ie and VMS.ie (Trade) will have access to far superior damage data and alerts than any other supplier

It has been known that some dealers buy one their own cars on foot of one of our trade reports by VMS (Vehicle Management System) and then sell that very same car to a member of the public with an inferior report from another history check supplier that does not show any damage alert at all on the vehicle.

The latest figures show that during the month of July, 297 vehicles were discovered to be written-off, which is 22 more than the previous month of June.

Franchise dealers had 115 vehicles for sale which were subsequently discovered to have mileage discrepancies of one kind or the other during the month of July. This was again an increase of 28 vehicles from June. It again highlights the importance of running a car history check even if it comes from an authorised main dealer.

During the month of June we actually saw a drop in damaged vehicles sold at independent garages down from 599 in June to  493 in July. This was a drop of 106 vehicles crashed or damaged sold at Independent dealerships.

Always get the history of a car if you are buying from any independent garage or dealership. Do not take their word for it, when they say that any kind of damage was “just a tip”. This is dodgy dealer code for; ‘it might have crashed before and was damaged but I’ve told you enough and I am hoping nothing comes back on me’.  Unscrupulous car traders are all too prevalent in the used car market.  The only way to protect yourself from buying a junker is to get a car history check.

As with car damage, there was also a drop in the number of cars showing mileage discrepancies during July. Independent Traders sold 192 vehicles (36 down from June) showing some kind of mileage discrepancy displayed on the report.

The private car sector is where you will normally find the biggest problems and the biggest risk but during the month of July there was a massive drop in vehicles sold which were damaged.

Always get a history check when buying a car privately as you have almost zero chance of any comeback or consumer rights after you have bought the vehicle.

Always carry out your due diligence when buying a used car from a private seller. Many people who sell their own car privately may not know about car history checks and may themselves have bought the car from the previous owner without knowing its true history.

Previous Article: Ireland could have free public transport by 2030
Next Article: Why you shouldn't trust a car history check from a used car website that is advertising the vehicle for sale