At this stage, most people know a little about 'hybrids' as they are becoming increasingly more popular and manufacturers are marketing the technologies but there is some confusion about the difference between a 'full' and a 'mild' hybrid car?

Toyota is Ireland's biggest seller of hybrids cars so hearing what they have to say on the differences between ‘full’ and ‘mild’ hybrid configurations are interesting.

The main and glaring difference between the two types of Toyota configurations is simple. A ‘mild hybrid’ is always a combustion engine with a manual transmission, whereas, all Toyota ‘full hybrid’ cars are automatics with manual transmissions.

A mild hybrid car is a regular ICE (Internal Combustion Engine) vehicle that has a low-voltage (48v) battery and an electric motor that is used to power the radio, air conditioning and other low-powered components of the vehicle.

These mild-hybrids electric motors can produce small amounts of electricity which can also give the ICE engine a boost on acceleration. Unlike, full-hybrid cars. These kinds of hybrids cannot power the drive-shaft of the vehicle on their own and they cannot drive in zero emissions, hence, they are classed as ‘mild’. As these cars cannot drive on battery power, there are considerably fewer benefits than a ‘full’ hybrid car. 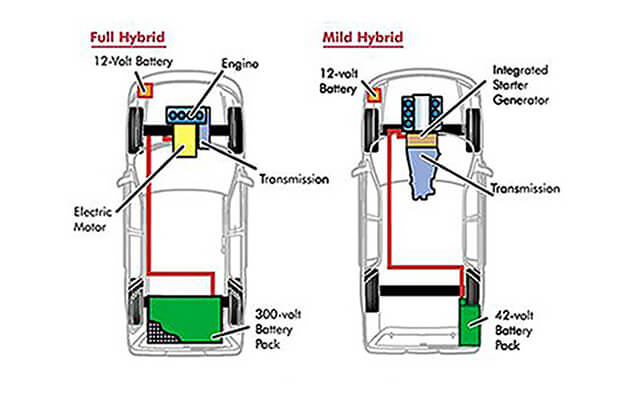 A ‘full’ hybrid, on the other hand, can drive on a battery-powered motor alone. A full hybrid will work off 600v while the mild hybrid only works off 48v. Along with that, the fuel consumption of the full hybrid will be 13 per cent better than the mild version.

Even though hybrid cars can produce 12 times lower NOx emissions than a regular diesel or petrol car, the mild hybrid version will produce 30 per cent more CO2 than full hybrid configuration.

There is also a third configuration to remember and that is 'plug-in' hybrids. These cars have a larger battery pack which can reduce the size of the boot space considerably. These cars can be charged at home or publicly. There is a range limitation on these types as you can only drive on full electric for about 50km.

Unlike a normal full-hybrid, you are constrained somewhat with the plug-in as it, as the name suggests, must be plugged-in to recharge, whereas the full-hybrid is self-charging and no charging outlets are ever required.