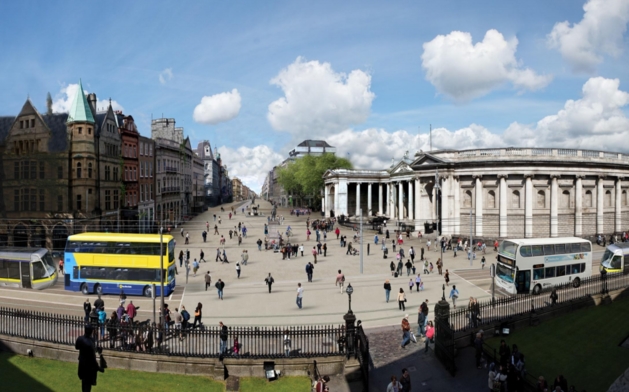 Dublin's College green was recently closed off to traffic for the second Sunday in a row. This was a trial in an effort to reduce traffic congestion in the city centre.

The idea was first proposed in 2016 and sought to ban all traffic in College Green, before being rejected by An Bord Pleanala last year over traffic concerns. These plans have not been completely abandoned and a new proposal is set to be put forward this year.

This trial was announced earlier in the year and proposed that the area in front of Bank of Ireland will be pedestrianised on three days.

The area has been temporarily pedestrianised as part of a three-week trial by Dubin City Council to reduce the amount of traffic coming through the city centre and see what it would be like without motorised vehicles.

The area is to be accessible only to pedestrians between 7 am and 7 pm, with some bus stops out of service and diversions in effect on the dates below:

There is also to be a temporary two-way cycle lane in operation from the Dame Street/Georges Street junction as far as Trinity Street, and cyclists will have to dismount here to enter the pedestrianised area.

Buses and cars are affected by this trial although the Luas is still to operate as normal.

These diversions will affect the following bus routes:

These restrictions have been put in place twice now and the last leg of the trial is on the 4th of August. From reports given by the public, it would appear that there is 50% more event space.

The purpose of this as said by Dublin City Council is to portray that events can be held here and the traffic restrictions in place allow this to happen.

Previous Article: The leader of the Green Party will eat his hat if Ireland doesn't halt oil
Next Article: How to Buy a Used Car