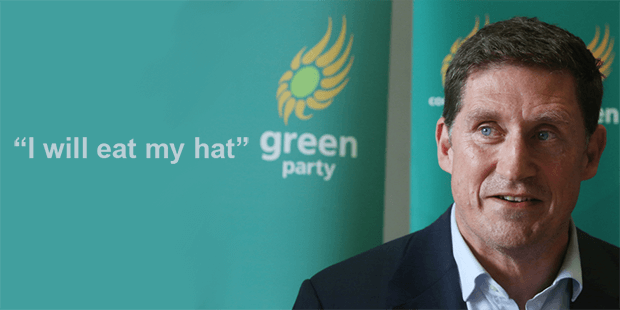 Leader of the Greens wants to eat his hat

Eamon Ryan, the leader of the Green Party here in Ireland has vowed to ‘Eat His Hat’ If Ireland Doesn’t stop oil and gas exploration.

In a speech at the MacGill Summer School,  Eamon Ryan, the leader of the Green Party in Ireland, has told all the other political parties that he will continue to push the climate action plan and will ‘eat his hat’ if Ireland doesn’t stop issuing licenses for new oil and gas exploration in Irish waters within a year.

“I will eat my hat if within a year we have not stopped the issues of new oil and gas explorations,”

Many who are concerned about ‘green’ issues are blaming the government for not doing enough to reduce emissions. They feel that the Government is “trying to pass the buck onto the everyday citizen of the country when ultimately, the buck stops with them.” The Minister Tweeted:

“Ireland has not been lacking in ambition, but in delivery. There has been no coherent strategy that would, in fact, deliver on commitments made. We cannot countenance another such failure. That is why the government’s Climate Action Plan has taken a completely different approach.”

It is planned that by 2030, Ireland will have five times the amount of ‘green energy’ renewables in the grid and also 33 per cent of all cars will be either fully electric or hybrid. Bruton went on to say:

Previous Article: The Greens want a ban on all older vehicles
Next Article: E-Scooter injuries on the rise in Ireland and the UK