Dublin City rickshaws could be banned 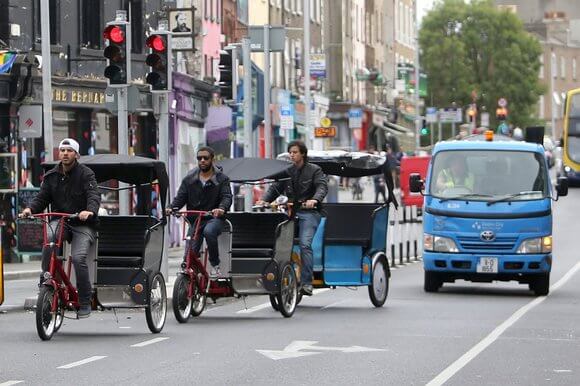 Rickshaws could be banned in Dublin

TAKE A WALK through the middle of Dublin City on any weekend and you will be hard pushed not to run into a rickshaw.

It has just been revealed that Rickshaws in Dublin could be facing an all-out ban in the capital city.

The National Transport Authority, the Department of Transport and Dublin City Council are all currently in talks to come to a decision on the future of the cycling taxi service in Dublin City Centre.

At the present moment, rickshaw operators are unregulated. Up until now, Dublin City Council has not been permitted to impose any bylaws upon this particular mode of transport but that may be about to change.

The unregulated rickshaw market has drawn the chagrin of the Revenue commissioners, politicians and also the gardaí. Last year Minister for Transport Shane Ross said that he would consider banning these contraptions.

At the present time, Gardai may only treat rickshaws as they would regular cyclists but following recent revelations about drug-dealing and other criminality taking place in rickshaws, the government is being urged to take decisive action.

These pedal-powered rickshaws fall into the category of ‘pedal cycles’ and are not considered small public service vehicles in the same way as taxies are and as such Shane Ross and his department nor the National Transport Authority (NTA) have the power to ban them.

JPC chair Daithí De Róiste has said if rickshaw regulations do not become suitably strict, the City will seek to see them banned altogether because of the increasing incidents of drug-dealing and injuries associated with the service.

As of right now rickshaws operators are operating with impunity throughout the city, unregulated and outside of any particular legislative oversight.

Previous Article: New car sales up by 4.5% in the first ten days 2017
Next Article: How to Buy a Used Car