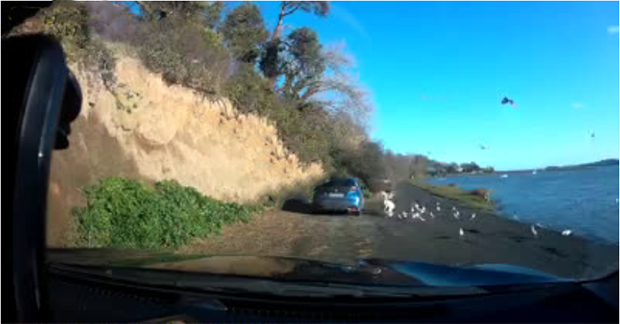 A Dublin motorist was caught on camera in what appears to be maliciously driving their car through a flock of birds and driving over a swan.

The dash cam footage of the incident was posted on Facebook by the user, Ray Watts who captured the moment the callous driver ploughed at high speed into a flock of the graceful birds.

The driver was caught at Broadmeadow Estuary near Swords and has caused a lot of concern on social media.

In the dash footage, you can see a flock of birds including two swans, swanning away and minding their own business on the narrow estuary road that leads to Donabate.

Moments later you can see how the driver ploughs through the flock at speed with obvious disregard for animal life and welfare.

The majority of the birds escape the oncoming car except for one of the unfortunate swans being driven over by the car and then having a narrow escape as it is ejected out between the wheels to limp away to safety in the water.

Thankfully the swan escaped with only minor injuries but it could so easily have ended up as deliberate roadkill.

The Facebook member appealed for anyone with information about the car to let it be known.

It subsequently transpired that the swan was able to swim away despite being hit by the car.

Mr Watts confirmed reported the incident to Balbriggan Garda Station and the video footage has been passed on to BirdWatch Ireland.

Under the Wildlife Acts of 1976 and 2000 in Ireland both swans and gulls are protected species.

And it’s a criminal offence to deliberately cause them harm.

In Ireland all gulls and their active nests are protected by National and European Wildlife Legislation/Directives.

Even though gulls can be real pests, it takes a cruel person to harm them but when it comes to swans, it is very disturbing to think that someone could be cruel to these beautiful and graceful creatures.

We Irish, should be concerned about swans as not only are they a symbol of love and fidelity around the world because of their custom of mating for life, in Irish mythology, swans are very special as they are usually depicted as shape-shifters, capable of transforming swans to humans at will.

Swans are considered one of our largest flying birds here in Ireland. They can be over 1.5 metres in length, and weigh up to 15 kilograms with a wingspan of up to 3 metres. There are seven species of swans around the world, and in Ireland we have the mute swan, so-called, as they are less vocal than other species.

In many cultures around the world, including the druidic culture of Ireland, swans were associated with music, love, purity and the soul and the light, so it comes as no surprise why they are revered in Irish culture and should be protected.

In ancient Ireland, even the bards wore a special ceremonial cloak called a tuigen, composed of the skin and feathers of a swan.

The most famous of all Irish stories is the Children of Lir’. When Lir’s wife, Aoibh, died, she left behind four young children. After Lir remarries, his new wife Aoife, is so jealous of the children that she turns them into swans and banishes them for 900 years.

Remember folks, drive carefully and mind protected wildlife while on the roads.