Car News /  Electric Vehicles /  Hydrogen vs Electric - Who will win?

What is the difference between hydrogen and electric cars?

The race to the best eco-car

Electric vehicles as many know are currently at the forefront of the motor industry due to the fact that they are more eco-friendly than conventional petrol and diesel-fuelled cars. Many developments have been made on EV’s which have allowed them to surge onto the market as ‘the next best thing.’ There is now a race for each company to get the best EV out there. But the EV is not the only eco-car in the framework, we must not forget about the hydrogen fuel cell vehicle (HFCV).

Although mentioned in a previous article this is not as well known as the EV, it should not be discounted as it too has potential in the elimination of fossil fuel-powered motor vehicles. This brings us closer in our aim to achieve the CO2 emissions target and a cleaner environment. In the long run which will prove to be the more viable option?

Both EV and HFCV lack an internal combustion engine and uses electricity as its fuel source rather than petrol or diesel. What makes the two different is where the electrically originates from (electricity just being a continuous flow of electrons). Instead of a battery, a hydrogen fuel cell car has a hydrogen fuel cell. This takes the element hydrogen and converts it into electricity. The process this uses is described in a previous post ‘Are hydrogen-fuelled vehicles really the way forward?’.

However, while neither car type produces pollution at the tailpipe, we have to look at when the ‘fuel’ is created. The electricity and hydrogen used to power these vehicles mostly comes from power plants that in the majority of cases are burning fossil fuels to produce that electricity and those fossil fuels will cause the same pollution that the EV and HFCV are intended to avoid. Until most of our electricity comes from solar, wind or hydropower which produces little to no pollution, is when these vehicles will be what we're looking for.

Yes, it is true that hydrogen is the most abundant element in the universe, although it does not exist in a stable state on its own. Nor is it easily obtained. It must be extracted from other compounds where it exists in a stable state, thus requiring a huge amount of energy to attain the desired element. One would be fooled into thinking that H2 can be easily obtained, unfortunately, this is not the case. Hydrogen extraction from water is an inefficient process and this is why the majority of it comes from fossil fuels, in a process that produces CO2 and CO, which of course is not environmentally friendly. The same applies to the EV as previously stated. 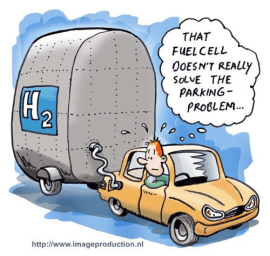 As communicated above, EV’s are currently leading the market and it would appear that it could stay like this for some time, due to the following reasons:

30 years worth of research and billions of dollars has been carried out trying to create a hydrogen economy, yet it appears far from implementation.

"In a study done in 2013, fuel cell expert Ulf Bossel explains that a hydrogen economy is a wasteful economy. The large amount of energy required to isolate hydrogen from natural compounds (water, natural gas, biomass), package the light gas by compression or liquefaction, transfer the energy carrier to the user, plus the energy lost when it is converted to useful electricity with fuel cells, leaves around 25% for practical use- an unacceptable value to run an economy in a sustainable future. Only niche applications like submarines and spacecraft might use hydrogen.”

Conversely, the infrastructure for EV’s is already ubiquitous and is only becoming more advanced. 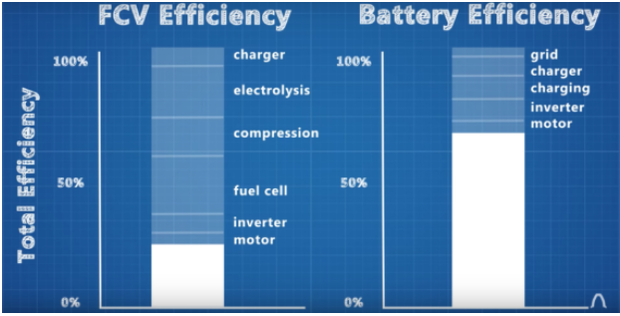 Previous Article: Ever wondered why a cars indicator makes a clicking noise
Next Article: Why you shouldn't trust a car history check from a used car website that is advertising the vehicle for sale