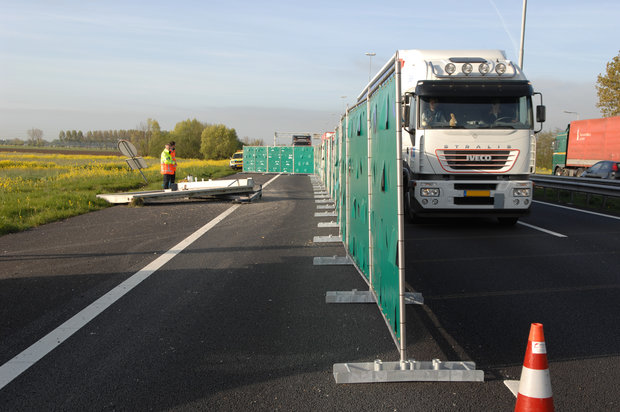 Ireland behind the times in road accident management strategy

Accidents happen on our roads every day and they are something we have all become used to, especially on Ireland's busiest motorway, the M50. A huge and persistent problem when there is an accident on our main roads is passing motorists who slow down to take a look at the scene and in doing so, cause huge tailbacks. This is known as 'Rubbernecking'.

Rubbernecking by definition is when drivers stare at accidents as they pass them. Not only is this a huge pain for everyone else as their nosiness slows everyone else down and holds up traffic even more than it needs to be but it could potentially lead to another accident.

Why is it dangerous?

Being distracted while driving is never a good thing as this is when bad things can happen. Your full attention should always be on the road when in the vehicle. If you do not give the road your full and undivided attention, not only are you putting yourself at risk but you are also putting your passengers and other road users at risk. Rubbernecking is considered a negligent act, which means motorists who engage in rubbernecking are held liable if they get into an accident.

Rubbernecking is dangerous because it causes the following

The importance of paying attention while driving

A distracted driver is a dangerous driver, and it only takes a split second for everything to change. With the use of mobile phones, this is another huge distraction that drivers face especially in an evergrowing technological world. Rubbernecking has the same effect as it takes your concentration from where it needs to be. When many drivers are distracted by the same thing, accidents increase.

According to the AAA (American Automobile Association), the risk of distractions on the road persists for about half a minute after the distraction took place.

Distractions including rubbernecking disproportionately affect young drivers, who, account for a large percentage of motor accidents.

Rubbernecking and other distracted driving can not only endanger you and other drivers, but road-workers, police and emergency medical services responding to an incident. So is it really worth it? 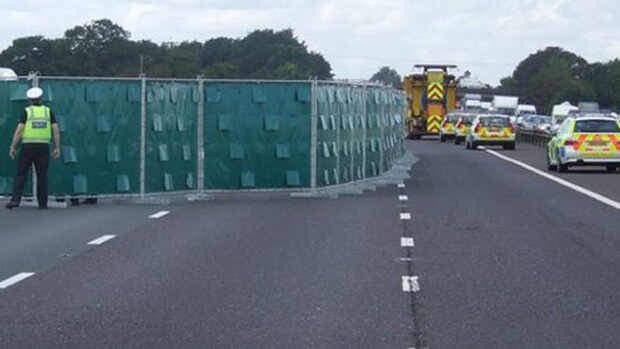 Some countries including England, Australia and the USA have adopted the use of ‘incident screens’. Incident screens are exactly what they sound like, large screens which surround the area of an incident so that passers-by are deterred from slowing down.

The partitions are put up to deter drivers who slow down to look at crashes on the opposite carriageway and therefore slow down the traffic behind. They form part of a foreign States National Transport initiatives to improve accident clear-up times. They are purpose-built to stop people from slowing down to take a look at accident scenes and keep traffic flowing.

The UK uses incident screens regularly for road safety and has had some positive results. Although there are no concrete statistics yet they have 105 screens available for use by the Highways Agency. Each set has 30 screens which are loaded onto purpose-built trailers and can screen up to 75m if used end-to-end. The cost for these to be built was £2.3 m with each one being £22,000 to give a total of 3,000 screens.

It was reported the screens were only used 77 times within recent years, as they cannot be used in every set of weather conditions, the likes of severe winds cause the screens to be blown away. 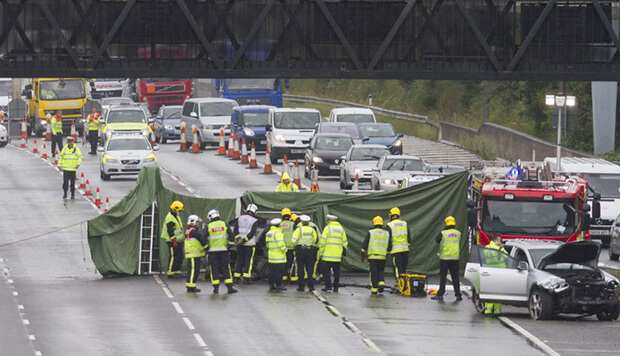 It would appear that Ireland is just way behind with this kind of road safety initiative. It seems like a 'no-brainer' so we have to ask the serious questions as to why the authorities here do not use these screens, particularly on major motorways like the M50?  This is something we should look into with the ever-growing amount of road traffic accidents on our roads.

The immediate reaction of all first responders and Gardaí to the crash is to firstly secure the scene so that they can make the scene safe for other road users and also so they can work safely within a defined space while they attend to any injured persons. It is a sad fact that if there are dead at the scene they are left momentarily in situ, in favour of tending to the injured who are still alive.

These terrible scenes, should, for multiple reasons be shielded from public view if at all possible, and the use of incident screens would be advantageous in these kinds of situations. The question we should be asking is; why are the Irish authorities not implementing these simple procedures, something that other State authorities do around the world?

If an incident screen is set up fast on-site to cover the scene of an accident, the view of motorists is blocked and this inevitably minimises rubbernecking, preventing traffic tie-ups and additional accidents. The screen also works to privatise fatal accidents.

This incident screen is a modern way to shield of accidents and incidents from onlookers. It has been proven many times that the only way to eliminate rubbernecking is to put the blinders on other drivers and this could be a factor in reducing secondary motorway congestion and accidents which caused by distracted drivers.

Previous Article: On the Frontline - Corona virus emergency and service personnel still in need of personal transport
Next Article: Ireland could have free public transport by 2030