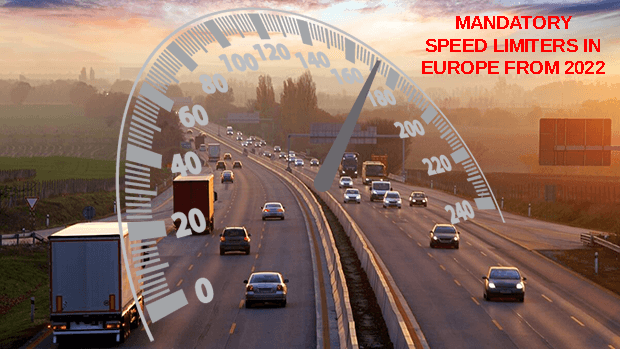 New laws coming into force in 2022 will mean that all cars sold in the EU will be required to have their speeds limited.

Road safety groups claim that this move will revolutionise road safety by stopping people from breaking the speed limit. In just three years, all vehicles EU vehicles will be required to electronically restrict the speed.

The mandatory speed limiting technology – called ‘Intelligent Speed Assistance’ (ISA) is being introduced by the European Commission, and could be fitted to all new cars within just three years.

The body which supports the introduction of Intelligent Speed Assistance the European Transport Safety Council (ETSC), ISAs, says the limiters would reduce collisions by 30%, and save around 25,000 lives within 15 years. The ETSC said that these limiters work by using a

“speed sign-recognition camera and/or GPS-linked speed limit data to advise drivers of the current speed limit and automatically limit the speed of the vehicle as needed.”

“ISA systems do not automatically apply the brakes, but simply limit engine power preventing the vehicle from accelerating past the current speed limit unless overridden.”

How will the limiter actually work? Well, the ETSC is proposing, in the beginning, to have an on/off switch which would allow the system to be overridden by pushing hard on the accelerator.

The override switch will allow drivers to speed up should circumstances need it, but it would also leave open the possibility that stricter rules could be introduced in the future. The ETSC also said:

“if the driver continues to drive above the speed limit for several seconds, the system should sound a warning for a few seconds and display a visual warning until the vehicle is operating at or below the speed limit again.”

The UK’s Vehicle Certification Agency (VCA) has stated that they will mirror the new EU rules after Brexit it’s likely the new speed limiter rules would continue to apply there.

Car manufacturers have maintained that they are unlikely to make different vehicles specifically for the UK market.