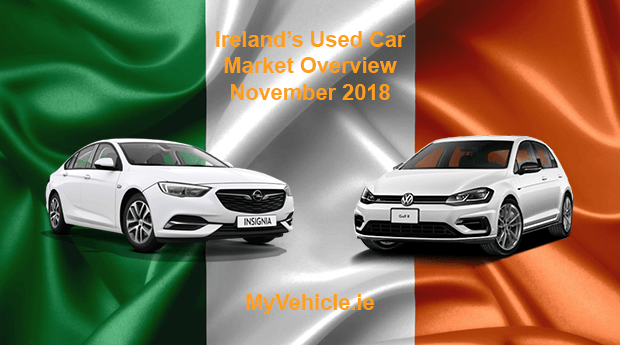 The MyVehicle.ie Nationwide Market Overview report for the month of November 2018 shows that of the top ten used cars sold by Independent dealers in Ireland, the number one best selling car was the Opel Insignia. This is a change from the usual culprits such as the Volkswagen Golf which held the number 1 spot in September.

There has been a change when it came to used cars sold by Franchise dealers for the November overview. Of the top-ten used cars sold, the number one spot went this time to the Volkswagen Golf. The Hyundai Tucson held the top spot in September but came in the third position in November.

Again in the November MyVehicle.ie market overview as shown in previous reports, the best-selling cars in the Republic of Ireland from Franchise and Independent dealers are all diesel fuel cars. This trend for diesel sales in Ireland is ongoing and has not abated considering the global backlash against diesel fuel and a growing moving away from this fuel in other European countries.

What you will notice from the November report is that of the top ten cars sold privately, every one of them were also diesels.

Previous Article: Dangers of Gifting a Quad or Scrambler Bike To Your child.
Next Article: Why you shouldn't trust a car history check from a used car website that is advertising the vehicle for sale