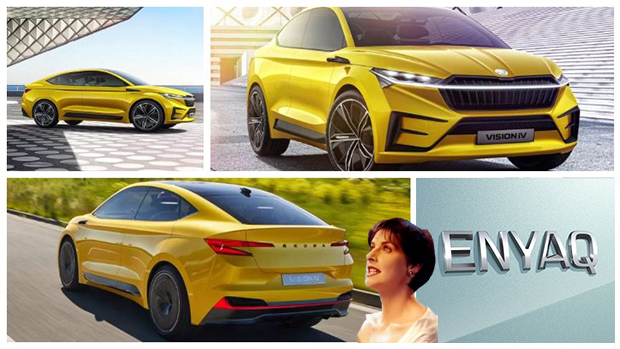 In a very interesting naming decision by Skoda, they have named their latest concept car after the Irish singer Enya.

The Enyaq carries on from the naming designation series with the brand names Kodiaq, Karoq and Kamiq.  According to Skoda, the E is also a reference to electromobility.

This is Skoda’s first battery-powered model based on the VW MEB (German: Modularer E-Antriebs-Baukasten) electric platform.

This modular car platform for electric cars was developed by the Volkswagen Group and its subsidiaries and is used in models such as Audi, SEAT, Volkswagen and in this case Škoda.

The new coupe styled Skoda will go on sale at the end of this year and will be priced about the same as a midsize SUV or saloon car.

Skoda plans to have five fully-electric car and five hybrid-electric cars on sale by the end of 2022 accounting for 25 percent of its sales by 2025.

The Superb has a plug-in hybrid already and the Octavia compact car will also get a plug-in option by the end of the year. They also just recently launched a battery powered version of its Citigo minicar.

The new Skoda Enyaq will be built at its plant in Mlada Boleslavin the Czech Republic, on the same production line as the Octavia. It is slightly shorter than the larger Kodiaq SUV, but has a larger boot.

Te Enyaq is powered by twin electric motors to give combined power of 302 bhp and featured a 83-kWh lithium ion battery pack to give a range of 500 km (310 miles) as measured on the WLTP emissions cycle.