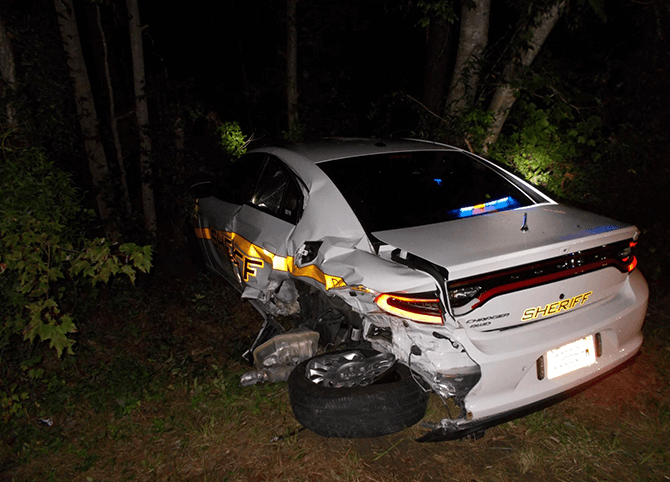 It seems hard to believe, but we have another Tesla driver who has caused a major collision while they do something stupid and dangerous behind the wheel.

Tesla and it’s autonomous technology has suffered another setback because of this incident as the driver naively placed far too much reliance on the present technology and ended up destroying a cop car.

The Tesla driver admitted watching a movie on his phone while using the autopilot. As a result of his careless reliance on a technology that has not been perfected yet, he crashed his car into, not just one, but two police vehicles that were stopped on the side of the road.

The incident occurred in Nash County, North Carolina last week when two police cars were responding to an earlier crash.

The autonomous Tesla crashed into one police car which then careered into the other police car. Thankfully on this occasion, no injuries were reported. The Highway Patrol officer, Jeff Wilson said that the driver “was watching a movie on his phone while the car was on auto-pilot when the collision occurred,”

Nash County Sheriff Keith Stone added, “It was a simple lane closure and then suddenly death was at our footsteps,”

Police authorities said the Tesla crash showed autonomous car technology “is never going to take the place of the motoring public paying attention, not texting, not being on the phone, but focusing on … driving”.

This is the second Tesla in the past two months that has crashed into a police car in the United States. The other incident occurred in July, when an Arizona police car was hit by a Tesla while on autopilot.

IN 2019, the head of the Insurance Institute for Highway Safety (IIHS) in the US said the name of autonomous car technology “has implications for what a driver understands.” The 2019 survey by the IIHS found the name “autopilot” can create misconceptions. the IIHS said

“Almost half of the survey respondents indicated they would take their hands off the steering wheel, and almost 6 percent thought they could take a nap while the system was in autopilot,”.