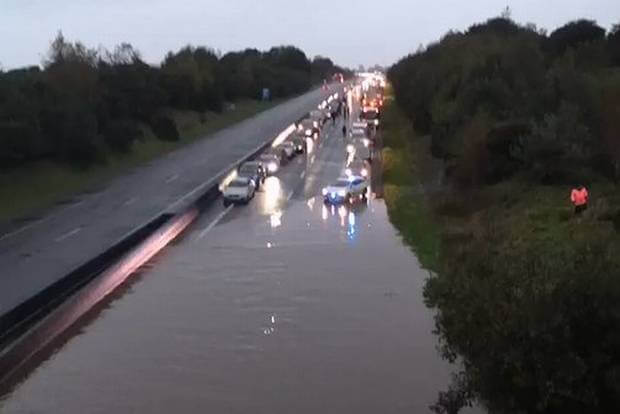 Video footage went out on social media showing the results of the flooding at Skeheenarinky, County Tipperary with a traffic jam formed behind the floodwaters as the cars could not pass.

The heavy rain resulted in total bedlam as motorist became stranded when Gardaí closed the road in both directions between J12 Mitchelstown North and J11 Cahir South. One driver tweeted that she was now nor sure if she will get home tonight.

“If you're thinking of using the M8 northbound then don't.

“Stuck outside Cahir for the last hour. They're letting trucks and big vans through. Saw loads of flatbed trucks going down so there must be cars stranded in the floodwater.

“Dunno if I'll get home tonight,”

If the floodwater isn’t receding how are we supposed to get through?”

Motorists requested the Guards to reverse the traffic as many of them were stuck on the motorway for a considerable amount of time.

Heavy rain has been forecast in the next few days and so many roads are liable for flooding as Autumn and winter truly set in.

The Meteorological Office put out one of their overly dramatic ‘Staus Yellow’ warnings yesterday but this kind of weather just comes with the territory as normal wintery conditions for our climate.

Forecasters have said that heavy rainfall will occur with a risk of flooding so motorists can expect the usual delays as winter sets in. AA Roadwatch advised:

"There is a Status Yellow Rainfall Warning in place for Munster, Connacht, Carlow, Kilkenny, Laois, Longford, Wexford, Offaly and Westmeath, valid until midnight on Monday 14th.

"It takes longer to brake on wet roads, so slow down and leave extra space between you and the vehicle in front. Only drive through surface water if you know it's not too deep for your vehicle.

There is also potential for travel disruption in the next two days, as well as flooding on already saturated or waterlogged grounds.

"Heavy rainfall expected during the period with some heavy bursts occurring in short intervals of time.

"There is potential for flooding,"

Previous Article: New budget emissions tax on all new and used car imports from 2020
Next Article: How to Buy a Used Car