New Highway Code changes to be introduced in the United Kingdom 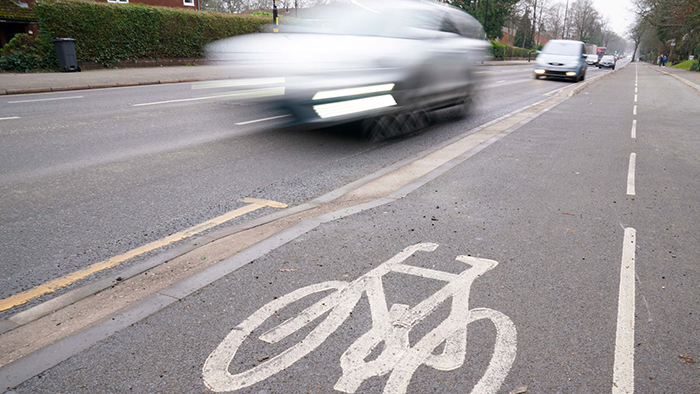 Many drivers may be unaware, but there has been a major overhaul of the UK’s Highway Code in which nine sections of the code have had 50 new rules added.

The new Highway Code rules have been specifically brought into force in a bid to improve road safety for pedestrians and cyclists.

The new rules  include a hierarchy of road users, which drivers are expected to be aware of and with consideration for pedestrians, cyclists and horse riders.

The Code prioritises the people facing the greatest risk on the roads, which are pedestrians and cyclists. The rules, though, do not  "remove the need for everyone to behave responsibly". 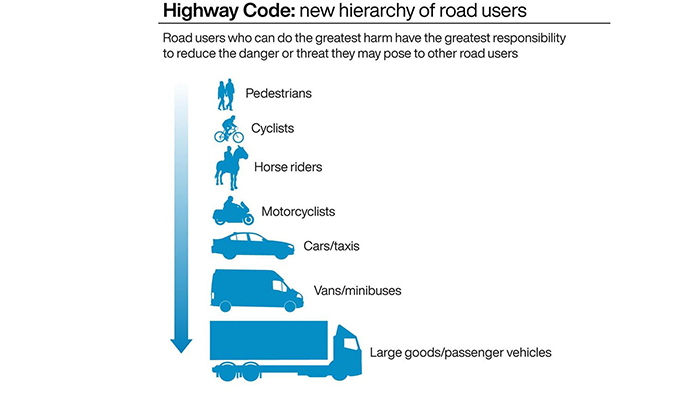 Under the new code, pedestrians have the right of way at junctions and motorists and cyclists should give way to any pedestrians that are waiting to cross the road.

As normal, traffic must give way to any pedestrians on a Zebra Crossing but they must also give way on parallel crossings. 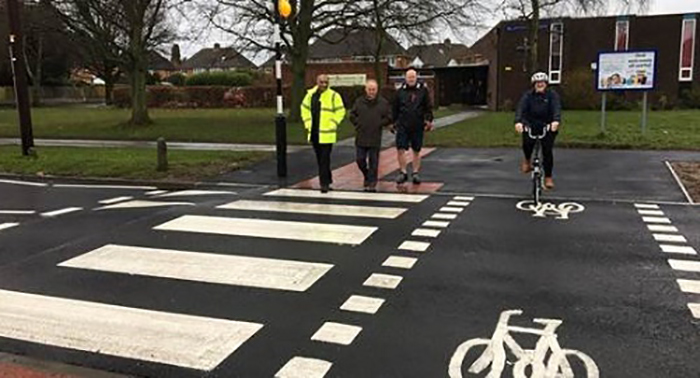 As most drivers do already, cyclists should also not overtake pedestrians or horse-riders closely or at high speed in shared spaces.

Cyclists are required under the code to alert others of their presence, for example, by ringing a bell, and anticipate that some pedestrians could be deaf, blind or partially sighted.

Pedestrians who are walking in shared areas should take care not to obstruct pathways and cycle lanes. 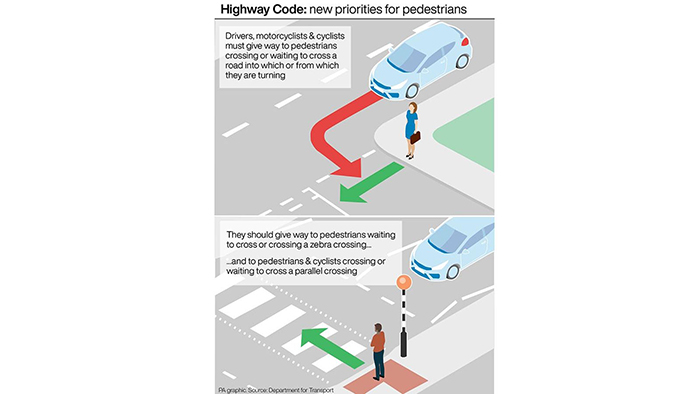 Cyclists should make themselves as visible as possible to all other road users and by riding in the centre of their lane on quiet roads, in slower-moving traffic and when approaching junctions.

Cyclists are also to be considerate to other road users when riding in groups. The Code suggests that they ride "two abreast" or side by side, particularly when accompanying children.

The rules explain that cyclists should exercise caution when passing parked vehicles and leave a distance of 1m between them and the parked vehicle to avoid slamming into an opening door. These rules seem rudimentary and logical and most cyclists naturally adhere to this common sense.

Here is an addition to the Code that most drivers will be unaware of and most likely will not adhere to, but drivers and also passengers should open doors with the hand furthest from the door and not the hand nearest the door, for example, their left hand to open a door on their right.

The technique is known as the Dutch Reach, and it encourages people to turn their head and look over their shoulder, reducing the chance of a door opening in the path of others.

At roundabouts, motorists must give priority to cyclists, horse riders and people driving horse-drawn vehicles and should not try to cut across their lane.

When overtaking more vulnerable road users, such as cyclists or, drivers should leave 1.5 metres (5ft) when travelling at speeds of up to 30mph. If you are traveling at a higher speed, then even more space should be given. At least two metres should be left when passing pedestrians walking on the road, such as on country roads where there is no pavement.

Cyclists going straight ahead at a junction have priority over traffic waiting to turn into or out of a side road, unless road markings indicate otherwise.

When charging an electric vehicle, motorists are asked to park as close as possible to the charging point to avoid creating a trip hazard from the charging cables.

All the new rules outlined above are advisory so you will not be fined if you fail to comply with the suggestion. Concerns have been raised that these new guidelines could have an adverse effect on safety. The AA President, Edmund King, said that drivers are

"likely to get hit by another vehicle from behind" if they stop on busy roads to allow someone to cross.

Pedestrians could also be put at risk if one vehicle gives way but another going in the opposite direction fails to stop.

It comes as an AA survey of 13,700 people found 33% were unaware of the changes, announced earlier this month - while 4% said they had "no intention" of reading them. Edmund King went on to say:

"Drivers will have to make their own judgements on what they should do in the scenarios they find themselves in,"

"Most people seem to understand it is about common sense, common courtesy and hopefully will bring a common cultural change."

Previous Article: Unpaid M50 toll charges lead to car seizures
Next Article: Why you shouldn't trust a car history check from a used car website that is advertising the vehicle for sale