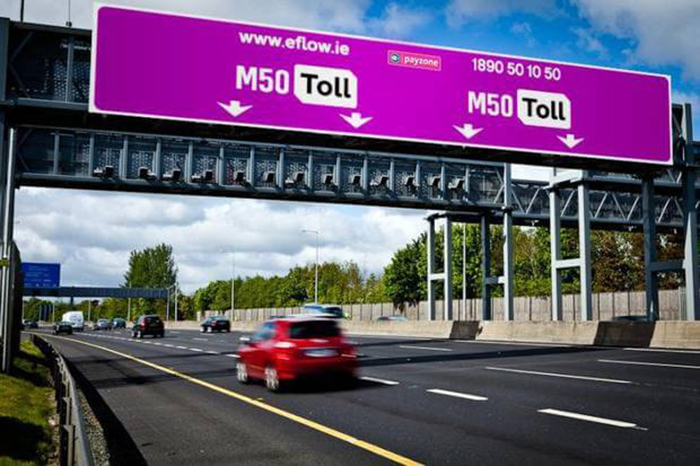 It has been revealed by the Transport Infrastructure Ireland (TII) that 94 vehicles were seized by the sheriff in the first ten months of 2021 for non-payment of M50 toll fines.

Among the vehicles seized were many luxury cars, such as a Lexus, a Land Rover Range Rover, a Mercedes Benz CLS and an Audi A5.

Toll dodgers must have racked up such high unpaid fines that their 94 vehicles were ultimately seized in total for most of 2021.

Over the same period in 2020 there were just 30 vehicle seizures for non-paid fines, and so the seizure in 2021 amounted to a 213 per cent increase.

The unpaid bill for all these motorists ranges between €5,000 to €15,000. These penalties must be paid off before motorists can reclaim their cars.

Some other cars seized were a BMW 520, a BMW 640, a Ford Kuga, a Kia Sportage, a Toyota Landcruiser and a Nissan Qashqai. The TII spokesperson said:

“The seizing of cars is the final act in a series of opportunities for people to rectify the situation, but when a judgement is made that is it.

"Enforcement is about fairness for the 97.3 per cent of the people who abide by the rules and there is a process for owners to reclaim cars after agreements on payments are reached.

"The M50 eflow barrier free tolling enforcement programme is overseen by Pierse Fitzgibbon (PF) Solicitors and emphasise the commitment to fairness on behalf of the 97.3 per cent of road users who pay their toll, making the compliance rate one of the best in the world.

“Unfortunately, there are a minority of cases that are not resolved during the process and end up before a judge. After a ruling a subset of those cases require the involvement of the sheriff."

The former operator of the M50 toll, Emovis confirmed in accounts that its Irish revenues decreased by just 8 per cent, from €25.4 million to €23.37 million, in spite of the Covid-19 lockdowns in 2020.

Emovis Operations Ireland Ltd increased their Pre-tax profits by 13.5 per cent to €1.85 million in 2020 after its business received an €8.07 million revenue boost from a new business in Qatar.

On August 6th, 2021, Turas Mobility Services, a joint venture between VINCI Highways and Abtran took over the management of the €373 million M50 e-flow contract.

Previous Article: Why is there a used car shortage in Ireland?
Next Article: Malahide Classic and Vintage Motor Show