What is Car Clocking? 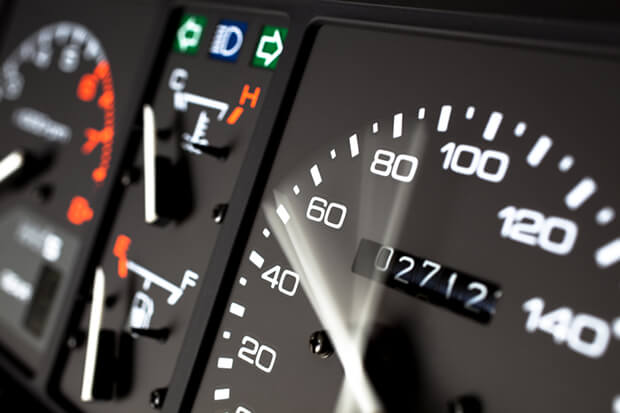 What is car clocking?

Car clocking is when a car's odometer (mileage recorder) has been put back or reduced so that it appears to have less miles on the clock.

Your car displays the total mileage it has driven on a meter called the odometer on the dashboard – this is essentially a ‘clock’ which tells you how many miles or kilometres your car has driven.

“Clocking” means changing the genuine odometer reading of the car in order to make the car seem like it has been driven less than it actually has.

The average annual mileage of a privately owned petrol car in Ireland is about 17,000 kilometres (10,500 miles). Diesel cars, if they have been used for business purposes, could have a higher average of about 24,000 kilometres (15,000 miles).

So if you are thinking about buying a car that has substantially lower mileage than this over its lifetime, and also shows signs of heavy wear and tear, for example on the seat covers, pedal rubbers, gear knob or steering wheel, always be wary.

Spotting a car that has been clocked can be tricky. It is always advisable to carry out some checks on the car before you pay any money over – check the car’s documented history and have it looked at by a competent mechanic to be on the safe side.

Clocked or crashed cars could turn out to be both dangerous and expensive for the buyer. If you don’t know what the real mileage is, or if you’re not aware that the car was previously crashed, then you can’t judge the real condition of the car and parts that you think should be in good working order might be at the point where they are about to fail.

Consumers should only buy a car once they are fully satisfied that the car is roadworthy and any repairs carried out on the car are to a high standard. A consumer should not be at a financial loss because they bought a crashed car.  Although insurance ‘write-offs’ can legitimately be allowed back on the road, many are beyond repair or structurally compromised. Always have a qualified engineer or mechanic check out a second hand car before you buy, and carry out a history check to find out if it has been crashed.

Is a clocked car dangerous?

A car that has been ‘clocked’ could turn out to be both dangerous and expensive for a buyer. If the real mileage isn’t known, then the buyer can’t judge the real condition of the car and parts that should be in good working order and might be at the point where they are just about to fail. So it's always prudent to carry out a comprehensive history check with MyVehicle.ie before buying a used car and get an independent qualified mechanic to inspect it thoroughly. A vehicle’s ongoing safety will correlate to its mileage, so clocking could in some extreme situations present a significant injury risk to consumers.

For example, say you are considering buying a car that just has 5000 miles on the clock, you certainly wouldn’t expect major wear and tear on the vehicle such as tyres or brake components, to be nearing the end of their lives. However, if that car has actually covered 20,000 miles, these items might very well be worn out and could contribute to your car being involved in an accident.

There could also be a situation i which major components fail because they have not been replaced at the right time. One prime example is a car’s timing belt: if this isn’t replaced at the correct mileage, it could break, resulting in hugely expensive engine failure.

How do I find out if a vehicle has been clocked?

It is always recommended and we we would say essential to carry out a comprehensive car history check through MyVehicle.ie. This can show if a vehicle has been written off, clocked or if it has outstanding finance  NCTS started printing the odometer history on the NCT Cert and the current mileage reading on the disc in July 2014. So this is another way to find out the mileage of a vehicle. When you buy a used car, always ask to see the Cert/disc and compare with the reading on the car on the day of your inspection. You should also ask to see the vehicle’s service history book and check for regular maintenance and the odometer recording.

Are there legitimate reasons why a vehicle would have less mileage on the odometer?

Yes, there may be legitimate reasons why an earlier reading is higher than a more recent one. For example; if a speedometer or engine has been replaced. However. this mostly relates to commercial vehicles and should only be carried out for genuine reasons. Proof of the original mileage should always be requested by potential buyers.

How are cars clocked?

All newer vehicles have digital systems usually under the driver’s seat or in the engine bay and it is simple to connect a laptop and use software to alter the mileage. The problem is that you don’t even need to spend money on the software to do this either; just search online and you’ll find a number of individuals that will change the odometer for you, for a fee of course.

This situation means that shady operators are able to advertise their clocking services which ultimately puts unsuspecting motorists at risk of buying a car with a tampered mileage, disguising its true history and likely level of wear and tear.

Why is clocking on the increase?

There are many factors that could be driving a rise in clocking. For example, one issue could be rise in popularity in recent years of personal contract plans (PCP) finance deals that often come with strict mileage limitations. The majority of new cars are bought with PCP deals, require the buyer to state how many miles they will cover in the car during the term of the contract. As part of the contract agreement where any additional mileage over the agreed amount settled on in contract can prove costly. This has led some to turn to ‘mileage correction’ services on the internet that offer to dial back the odometer to dodge the financial penalties.

A car’s mileage has a huge effect on its resale value. If, for example there is a penalty fee of say 10c for every kilometer that exceeds the agreed limit you could be looking at a huge excess. Just 5000 extra miles per year on a three-year PCP deal could end up costing you an €1500. You can see then why some would want to clock the car so as to avoid this hike in expense. Added to this, because a car is not tested by the NCT or MOT in the UK for the first three years of its life, there is a lack of official mileage recordings against the vehicle. This is also a contributing factor to the problem.

Why does the NCT not check for clocked cars and report them?

The NCTS is not responsible for policing odometer fraud or clocked cars. The data recorded at the NCT is transferred to the Department of Transport, Tourism and Sport National Vehicle and Driver File (NVDF) where it is stored. An Garda Síochána has access to this data file in the event that want to investigate a particular vehicle. Enforcement of the law on clocking is the responsibility of An Garda Síochána (AGS)

How could a clocked car pass the NCT?

Even though a clocked car could potentially be dangerous this is not always the case at it may not be dangerously defective despite it being clocked. The car may be in quite good mechanical order despite any high mileage as it may have been serviced and/or parts replaced before sale. In this instance, a car can go through it’s NCT and pass. The NCT Cert is not a warranty and should not bee seen as such. That is why MyVehicle.ie strongly advises all potential buyers to carry out a car history check and get a vehicle independently inspected by a qualified mechanic before purchase, regardless of whether it has a valid NCT.

Is there a law against clocking vehicles?

Yes and no. It is illegal to interfere, or engage another person to, interfere with an odometer and not tell the buyer but it is not illegal to clock a car if you inform the buyer that it is clocked. Under the Road Traffic Act, 2014  It is an offence for a trader or private seller to mislead customers by providing false information in relation to a “products usage or prior history”. If stopped by An Garda Síochána while driving a dangerously defective vehicle, it is the driver/owner that’s liable for prosecution. So buyers need to make sure they’re fully aware of what condition the vehicle is in before using it on the public road. Road Traffic Regs.1963.

I bought a clocked car and want to report it. Do I have any rights?

With so many cars being clocked by their owners, potential buyers need to take the appropriate steps to be sure their purchase really is everything it seems as unsuspecting buyers could be saddled with higher running costs further down the line.

Before paying for a car, you should ask the seller if the car has ever been crashed.  You should also ask them to write the mileage, as displayed on the odometer, on your receipt. That way you have a record of the mileage the seller claimed was on the car if you find out later it has been clocked. If they are unwilling to do this, you should consider walking away without buying.

If you have evidence that a car has been clocked or crashed, report this to the consumer protection possible. You should also contact the Gardaí as well as they have successively taken cases against traders who commit odometer fraud. You should act quickly though as any delay in reporting it may affect our ability to take action. The Competition and Consumer Protection Commission cannot investigate a suspected clocked if you have had it for more than three years.

If you have concerns as to whether your vehicle is safe to drive please bring it to a qualified mechanic for a thorough inspection. If the dealer/garage is a member of SIMI (Society of the Irish Motor Industry) you may also wish to report the clocking to them. If you suspect odometer fraud, you may contact your local Garda Station and the CCPC on 1890 432 432 or 01 4025555.