Car News /  Statistics /  Are PCP’s as bad as some are making out? | PCP Car Deals - MyVehicle

Are PCP’s a good idea?

When considering financing a new car, you may have considered a PCP Personal Contract Plan? When weighing up all your options PCP’s can sound a good idea and they can be for some but it is necessary to consider all options that are right for you.

There has been some negative media focus on PCP Finance recently in the media and a certain amount of scaremongering around this kind of car financing so it's a good idea to take a rational look at this kind of finance and all the pros and cons.

Some of the benefits of PCP are a low deposit or trade-in, low monthly repayments, the benefit of changing to a brand new model at the end of the term or starting all over again.

The problem though is that Personal Contract Plans are as of now, unregulated and go generally unreported. Dealers are dishing out easy loans with minimum underwriting in a bid to sell their stock of new cars to the happy customers. It all seems good and generally speaking it is but there are certainly other things to consider when it comes to PCP finance.

At the moment, it is estimated by some that almost one in three cars are sold as PCP. The true figures are not known, as there is no central registry of these loans, unlike other countries which have an official record. Reliable data on Irish PCP agreements are hard to find and so it can be hard to develop an informed understanding of the market in Ireland due to the lack of actual figures.

New research commissioned by the Central Bank has found that although the business model for PCP finance seems sound at this time, there could be some issues with this type of finance down the line. According to the Overview Report on the Irish PCP Market by the Central Bank

“At the end of 2017, e1.5 billion, or 126,249 contracts, were outstanding in PCP-related finance advanced by financial institutions and owed by Irish resident households. We find that PCPs are the current driver of the growth in bank-related lending to Irish households for non-mortgage purposes, and have become the most prevalent source of car finance in the Irish market since April 2016.” 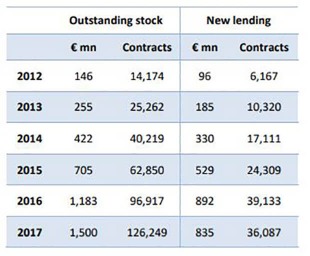 What is a PCP and how does it work?

PCPs have existed in the UK for over 10 years now and account for the majority of UK car sales (80 per cent according to the Bank of England) Like the UK, PCP finance has become popular here in Ireland in the past few years.

PCP’s are a type of hire purchase (HP) finance agreement used to purchase a vehicle. The car buyer pays a deposit and then makes regular monthly payments over the lifetime of the agreement which is usually 3 years but in some cases, it could be 5.

The difference between this and a standard hire purchase agreement is that at the end of the loan term, there is a final large payment obligation to fulfil if you want to own the vehicle. Another option is to enter into a new PCP contract at the end of your first agreement. As with traditional HP agreements, the financial institution remains the owner of the vehicle until the final payment is made.

Under the terms and conditions of the PCP, the consumer must abide by certain contractual restrictions on usage and maintenance. These would include maximum mileage limits and certain servicing obligations, such as only getting the car serviced at a designated location such as the dealership the vehicle was bought. Many of these restrictions vary across different financial institutions and dealerships.

At the end of the term of the PCP agreement, there is a final optional payment known as a balloon payment which is an agreed amount set in stone at the origination of the contract. The agreed amount is known as the Guaranteed Minimum Future Value (GMFV). This guaranteed future payment is set at the beginning by the financing entity and usually in conjunction with the manufacturer of the vehicle.

The GMFV is set at the beginning, taking into consideration the monthly repayments and the car’s depreciation in value, alongside other costs such as the interest expense.

Although manufacturers can propose a GMFV, the final say always falls to the lender. The Central Bank has surveyed these lenders, and it is their belief that GMFV’s are being set quite conservatively. They are remaining conservative with the GMFV because of the possible, if not inevitable pricing risks due to the transition from ICE to EV and also taking into consideration Brexit and current and also proposed diesel restrictions.

The lending institutions try to set the GMFV somewhat lower but close to the estimated final value of the car at the end of the agreement. Their aim is to facilitate a build-up of equity with the result that at the end of the agreement, the consumer will again use this equity to part-finance another PCP. One result from setting a lower GMFV is that monthly repayments are set higher.

Why are PCP’s being perceived negatively or risky for consumers?

If you have read articles in the media recently and heard talk radio commentary of the subject, you would probably get the opinion that PCP’s are not a great idea?. With any financing agreement, there are always risks that you have taken out too much finance and you could run into budgeting issues but this is always going to be the case and so the necessity of weighing up all the options before you commit to any kind of financial contract.

Most likely, the negativity is stemming from the recent Central Bank report on PCP finance in Ireland. The report contains phrases such as "negative equity", "credit bubble", "sub-prime" and "churning".

Everyone would agree, that it is the responsible thing to do to be conservative about our understanding of the benefits of PCP and it is the task of the financial regulators to be level-headed in their approach, but such conservativeness should not distract consumers from some of the benefits of PCP financing after all factors are taken into consideration as PCP’s can be a great option for certain consumers.

It is estimated that €1.5bn is outstanding in car finance in Ireland as of 2018 and figures from the Central Bank are indicating that one in three cars are sold by PCP. In the past six years, the number of new cars sold through PCP’s has risen from 14,000 to more than 126,000. Ever wonder how there are so many new cars on Irish roads? Chances are, the lady or gentleman driving that shiny new 182 beside you on the motorway has financed that car through a PCP. If the car they are driving is a company vehicle, their boss didn't buy it for them but most likely opted for PCP for a reason.

In saying this, there is still a lot of concern out there with regard to PCP finance. In the UK, regulators are voicing their concerns as they are here, with £60bn (€67bn) being loaned via PCP with almost 80pc of all new cars in the UK sold under one of these contracts. In the United States, where the concept was invented, it is estimated to be at the mind-blowing figure of $1.2 trillion dollars. It is the case that over there, arrears have been massive, and companies have been flogging the debt off to vulture funds for collection.

So it seems to be like the sub-prime housing bubble which caused the massive collapse in 2008 which sent Ireland reeling. Many are spotting an analogy to the housing market, and they may not be wrong so as with anything financial, caution is a must. PCP may indeed be a worthwhile financial option for some consumers but we also must be mindful of the hidden dangers that may be lurking around the corner.

Ireland is a very small market on a global scale, and to give you just an idea how big the global markets can be we can take Volkswagen for example, who alone manages €157bn of its own car debt globally.

In recent years there has been a flood of UK imports into Ireland which has had the effect of depressing the second-hand car market since 2016. The Central Bank report says:

"Negative equity may be of particular concern in the Irish market, given the post-Brexit fall in the value of sterling which has seen an increase in cheaper used car imports, potentially reducing the prices of used cars in the future and pushing existing PCP contracts towards negative equity."

Advantages and Incentives of PCP Finance for consumers

The Central bank has called into question some of the incentives offered to consumers by dealerships and banks. They go on to highlight the "appropriateness" of credit checks on affordability before lending, as they can be far less rigorous than for a normal personal loan. They find this a concern as at this moment PCPs do no fall under the Central Bank's Consumer Protection Code.

That means that lenders themselves are policing the PCP market in Ireland. There are obviously some advantages to this lack of regulation for certain consumers who will benefit from the current structure of PCP finance in this country.

Pros and Cons of PCP Finance for Consumers: 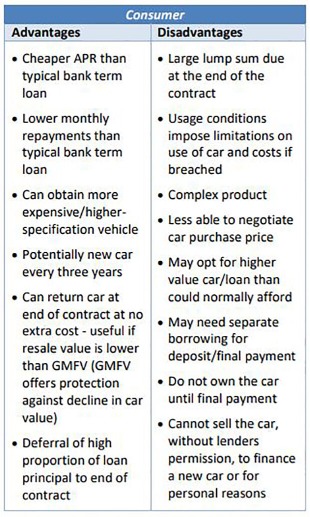 Although the Guaranteed Minimum Future Value (GMFV) figure is set at the outset of the agreement, the depressed second- hand market which they predict will be emerging over the next two or three years may result in GMFVs not being as high, meaning future initial deposits and balloon payments will be higher. In addition to this situation, the GMFV you may have been promised at the start of the contract may now not be enough to act as a deposit on your next car?

PCPs are specifically designed to have positive equity at the end of the contract and the Central Bank has admitted that it would take a shock to, or miscalculation of, the market to see a situation where car dealers and garages are negatively affected by the sale of PCP products.

Pros and Cons of PCP Finance for Dealerships: 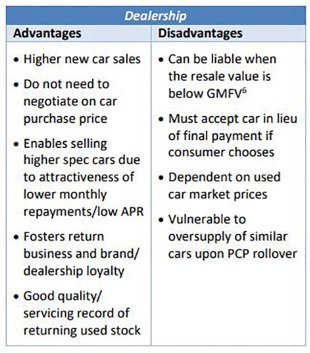 At the end of 2017, Irish resident banks’ direct exposure to the Irish motor trade sector is €1.7 billion, equivalent to 4 per cent of total NFC (non-financial corporations) credit. This is in addition to the €1.2 billion outstanding

Current data show that 0.5 per cent (or 650) of all PCP contracts are in arrears, with almost no amounts written-off.

So are PCP as bad as some would make out? Well, when all is said and done, Personal Contract Plans are a very convenient, low (or zero) interest finance arrangement to consider when purchasing a new car.  With anything like this, though, there is always a caveat to consider and it is essential to look at all your options before you drive away from the showroom in your brand new car.

Pros and Cons of PCP Finance for Financial Institutions: 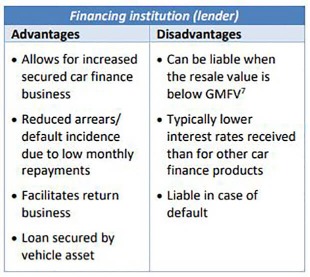 Previous Article: City of London limited ban on non-electric ICE vehicles
Next Article: Why you shouldn't trust a car history check from a used car website that is advertising the vehicle for sale