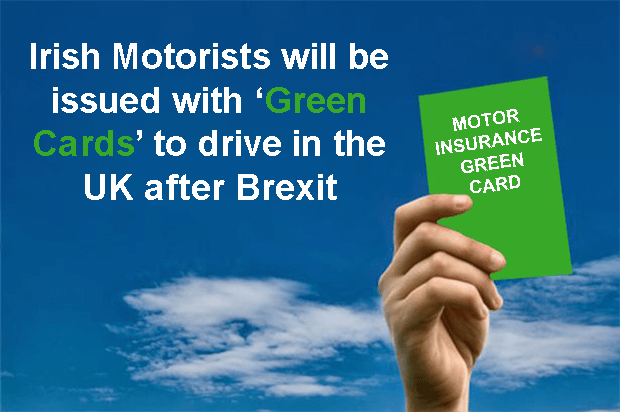 Insurance companies in Ireland are preparing to issue what they are calling ‘green cards’ to their customers who want to drive in the UK which includes, Northern Ireland.
Under new rules being initiated by the Irish insurance industry, motorists will have to apply one month in advance before travelling in the United Kingdom under Irish their insurance premium.
From the beginning of March, many motorists may very well feel the first tangible effects of a no-deal Brexit for the first time.
In the event that the UK leaves the European Union in March without any deal (No-Deal Brexit), all vehicles travelling between the Republic of Ireland and Northern Ireland or Britain will be required to have a document to prove they have valid motor insurance in that jurisdiction.
It has been reported that as much as 400,000 green cards are being sent by the Motor Insurance Bureau of Ireland (MIBI) to all Irish insurance companies and brokers this week.
These ‘green cards’ will then be allocated to any Irish motorists who wish to drive their car anywhere in the UK. If you want to take your car to the UK you will have to apply for the documentation a month before your plan to go.
This new motor insurance ‘green card’ is actually an internationally recognised insurance document which proves a driver has the minimum compulsory motor insurance cover which is required for the country you are visiting.
The motor insurance ‘green card’ is documentation and a guarantee to the visited country of insurance for a minimum of 15 days and can remain valid until the expiry date of the motor insurance policy, providing cover for multiple trips.
The new card will be sent out to policyholders in the Republic by Insurers and also insurance brokers from the beginning of March in time for the official March 29 Brexit date when the United Kingdom exits the EU.
Previous Article: New 5 Seat Commercial SUV Vehicle Registration Tax Changes and How They Will Impact Your Business
Next Article: Almost 50,000 new cars were sold in the first month of 2021